So I picked this set up awhile ago when Mantis King and myself first started talking about meeting up at PAX East to do a 14p or minifig scale game for fun and promotion of all our favorite LEGO War Game. Original Price $39.99

It was a fun piece to put together and if it isn't obvious I am planning to put this out there as cover minus the Welcome Sign and clock tower but the Fence might be a cute detail to leave out despite not being tall enough.

Maybe keep the Town Sign for some one hit flash cover?

Posted by Dark Cloud Blogs at 2:11 AM No comments:

This is the current special at the LEGO Shop; Buy anything Nexo Knights and you get this for free.

Like this minifig but no; I did not get any MF0 creations out of this set for -5 points.

Certainly has usable parts for +5 points....

but I wouldn't say it has enough useful parts for -5 points.

Total: B- set over hall; though it be interesting to see if someone could to something with those trans-orange wheels...
Posted by Dark Cloud Blogs at 2:51 AM No comments:

Another Target polybag, this time you will find this one around the registers.

Not a good start as I not able to build anything from this set. -5 points

There are a few useful parts and maybe some fun ones. +5 points

Sadly this one is not a winner for -5 points.

Total: C class set, first real bad one of the year. They can't all be winners!
Posted by Dark Cloud Blogs at 4:08 AM 2 comments:

First a special thanks to the Pilots/MoF0s who hang out on the Mobile Frame 0: University Discord with me.

So this isn't a new topic but just my try at the idea of it. I will create a thread on The Hanger for discussion of my take on this concept which you can find here: Hanger Thread. What am currently presenting is semi refined version of the Pilot Leveling System with a set of options to try out.

Intent: The idea of Pilot Leveling is something new to try/switch things up if a group of friends are planning to play several games or some link games together in some fashion.

Aces: Each player/squad only has 1 designated pilot that is their Ace that can level up.
or
Big Damn Aces: ALL PILOTS ARE ACES and have the potential to level up.

Pilot License: Every Ace has their Pilot License on record and is how you will track their levels and abilities. Either use note cards or sheets of paper. A license includes a Pilot's name, their earned experience points (XP), their level (you could use ranks instead and start at level 0) and a identifying symbol or color(s) that are also on their frame.

Levels and Abilities: All Aces start of at level 0 with no abilities. When an Ace levels up to 1 they must chose a Specialization that will shape the rest of their abilities as they level. Each specialization is one of the frame systems and each weapon system range is a separate specialization. An Ace does not have to carry his Specialized System on his frame during a combat but without it they will not gain their specialized benefits.

Green: As long as you have a green system (not Sprint) when this frame is activated by another frame's attack you may move it behind cover if cover is one unit away. Minus one to your green die roll.

Blue: As long as this frame has a blue system the owner may treat the frame one unit bigger in all direction for determining if it counts as cover for another frame.

Yellow: As long as this frame has a yellow system when it spots a frame it may also had a spot of one on another frame that is up to two units away.

Red, Hand to Hand: As long as this frame has a red system and fails to damage it's target during a hand to hand attack the frame gets to make 1 extra attempt at damage but needs to roll a 5 or 6.

Experience Points and Leveling Up

Each Ace can only level up one time between games.

So if you want to add another layer making leveling even more precious you can have Pilot Death but this is certainly optional.

Non-Aces and Level 0 Aces don't have to worry about Death Checks.

Ejection System: Remove a White Die from your Ace's frame for the game to guarantee your Ace survives.

Ace Death: The Ace is dead, make a new pilot card with a new name. New Aces can inherit a previous Ace's colors/symbol.
Posted by Dark Cloud Blogs at 2:09 AM No comments:

This set is currently available from TRU.

I built this alright but small frigate. Also you can probably hi-jack the jetpack on the krypling (???) and slap it onto a frame. +5 points.

Certainly some fun and useful parts here. Like to see someone use those 1x1 green tiles as faces as a cockpit but the angle might be a challenge. +5 points.

I am going to go with yes for another +5 points.

Total: A+ set, fun little thing plus you get Krypto! Come on!
Posted by Dark Cloud Blogs at 1:49 AM No comments:

LEGO The Batman Movie Batman in the Phantom Zone 30522

As the posting of this post this set is at Target and you should find it in the season section (Currently Valentine's Day) but some stores might put it in the LEGO section by accident so keep your eyes peeled.

I got this quad walker that I am rather proud of. +5 points.

Several useful parts here, even some rare ones for Chub are connection. +5 points

This is an easy yes for +5 points.


Total: Another A+ set from The Batman movie line; most impressive. I have already grabbed a few.
Posted by Dark Cloud Blogs at 1:50 AM No comments:


So starting the year strong with this set BUT unfortunately it is a LEGO Store exclusive when you buy over $35 of merch, each time. Hopefully it will make itself out into the wild.

I got myself a decent little frame plus the set itself could be a nice wide frigate or a small sized cruiser; just depends where you bend the wings too really. +5 points.

Despite a good chunk of plates over all I still think it is a worth while amount of MF0 useful parts for +5 points.


Total: We have an A+ set for my first review of the year! Hopefully we will see this out in general stores in the near future; hope you like working in Black... 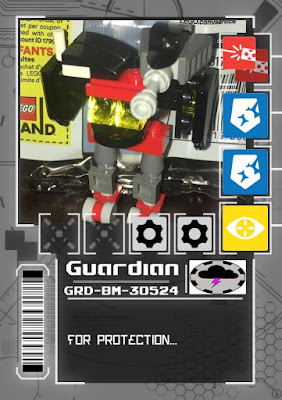 Posted by Dark Cloud Blogs at 6:40 AM No comments:

So I believe this is my first post like this but it makes sense as there wasn't much to anything on this blog until Mobile Frame Zero: Rapid Attack came into my mailbox and I came across Mobile Frame Garage blog.

I have had 50 posts this year which is more than lasts years but not my best. This posts are mostly the familiar reviews of sets for building frames but there are a few what I call showcase posts, a MF0 fiction piece and a bit of Pokemon fan fiction.

I am not that disappointed in only having 50 posts as I have also started creating a YouTube series trying to teach MF0 which is two episodes in and I will finish it (but might take some time.) I also started Mobile Frame 0: University which is a MF0 centered Discord channel. Because of MF0: U the Hangouts are pretty going to be put up or maybe a quarterly thing instead. Perhaps a quarterly check in?

Also locally it seems MF0 is finally picking up so I can have regular games with a local community! All very exciting; and that is pretty much 2016. I hope you enjoyed the ride because I certainly did. Let me know what you thought?

The finishing up of the YouTube series, maybe trying Voices of MF0 again but the big deal looking forward to in 2017 is going to PAX East (finally!) to meet my new friends and heroes in person along with playing a game of MF0:RA at minifig scale! How exciting! What in Dark Cloud Blogs or in MF0 in general are you looking forward to in 2017?
Posted by Dark Cloud Blogs at 9:54 AM No comments: