I really liked this one from the moment I saw it just for the build so I picked up two. I found this at 5 Below.

I got two out of this set, a frame and a spaceship. Also I think it could be used as is for set dressing or maybe converted as a crash site station. +5


Is it below, at, or above the golden ratio? (Ten Cents Per Part)

Yes but I did think about saying No. +5


Total: Wowzers, we have an A+ set! (though maybe close to an A). The spaceship is a slight modification to the set build (very firefly) but most likely best as an HVA in Intercept Orbit. I like the frame I build for the most part, specially the hip connect style. The transport plane bit be slightly to small for 7p but should still look nice changed to make a crash site or something.

Posted by Dark Cloud Blogs at 1:56 PM No comments:

As you can see I got this at Five Below but it was quite some time ago. The tree caught my interest and is the reason why I bought it (a few bags actually. I like trees for terrain.)

Frame or spaceship, not going to happen here with this set. Though it does make a tree from the set so we break even with 0.

Is it below, at, or above the golden ratio? (10 cents on the dollar, no wait on the part)

The giant mushroom makes a return!!! There are a few usual parts but not many. +5 (am I being nice?)

Total: Well our total gets a C+ rating which makes me feel sort of bad that I bought more then one but I still like the tree. I remove the torch and maybe the mushroom (or just don't count it). Either way as you can see they are tall enough to be cover but most likely won't be after taking just one hit but hey you need to have some hard and soft cover I feel!
Posted by Dark Cloud Blogs at 5:32 PM No comments:

This is the current Target polybag and WOW haven't done one of these in a few months. Let's make up some lost time!
Can you build some sort of creation right away?

Nope, nothing. Might be able to get a station out of it but I doubt it. -5

Thankfully there are a few of those so this set isn't completely shot yet! +5

A lot of barrels and a few other random neatness but I don't think we have enough to 'more then a handful' here. -5


Total: C, certainly not the best set but...

Outside of being for MF0 parts, I like the build itself which is why I bought it. It a simple build yet very much looks like what it suppose to...it just fun...I wonder if it be practical for a frame to have a motorcycle...

Posted by Dark Cloud Blogs at 4:48 PM No comments:

First this is a 'living document'.

What do we mean by living document? Essentially as the game grows and evolves, so will this post. Any major/additions changes and I will re-post to the usual places but I don't think any feed sources will update.

Purpose: A reference/guide for players of Mobile Frame Zero series about scale, sizes and standards. This isn't official but pulls info  heavily from the Hanger (MF0 forum) via discussion and/or 'word of god(s)' and sometimes my own crazy thoughts.

Scale: a comparable value of in game size compared to our real world. The scale size is referring to how big is a human at this scale.

Size: rough size limits of a build given the scale of your game.

Standard: a suggested default or a possible assumption of limits.

You and your friends can set any scale/size for your games but some choices might cause you to have to tweak the rules when it comes to ranges.

In the community we generally refer to scale by plates (as in the smallest height of LEGO) with a number in front to indicated how many plates for example 7p. What is this referring to? People. 7p plates is roughly equal to a person (or 6p, or 4p, that is how tall people are).

Why do we care about that? Well, it effects the look of your cover/stations. With the reference of how big a person is (you), you know how to build everything else in relation to that.

What about Size? Well, we are talking about the volume that your frame takes up and out point of reference here for measurement is a stud for width and depth while using a brick for height so 10 stud (wide) x10 (stud) deep x 12 bricks (tall). We refer to this simple as The Box.

Why this box? Well the best two reasons I can give is 1) the rules work well with your frames not breaking the Size suggestion and 2) This is the general assumption Soren used when making the iconic MF0 frames.

As for 1) I mean, the bigger you get out of the box the easier it is to get shot while gaining no real benefit besides look factor.

So at 7p Scale using the The Box the rules work very well and you have a nice scale to work with when it comes to building stations and your cover. 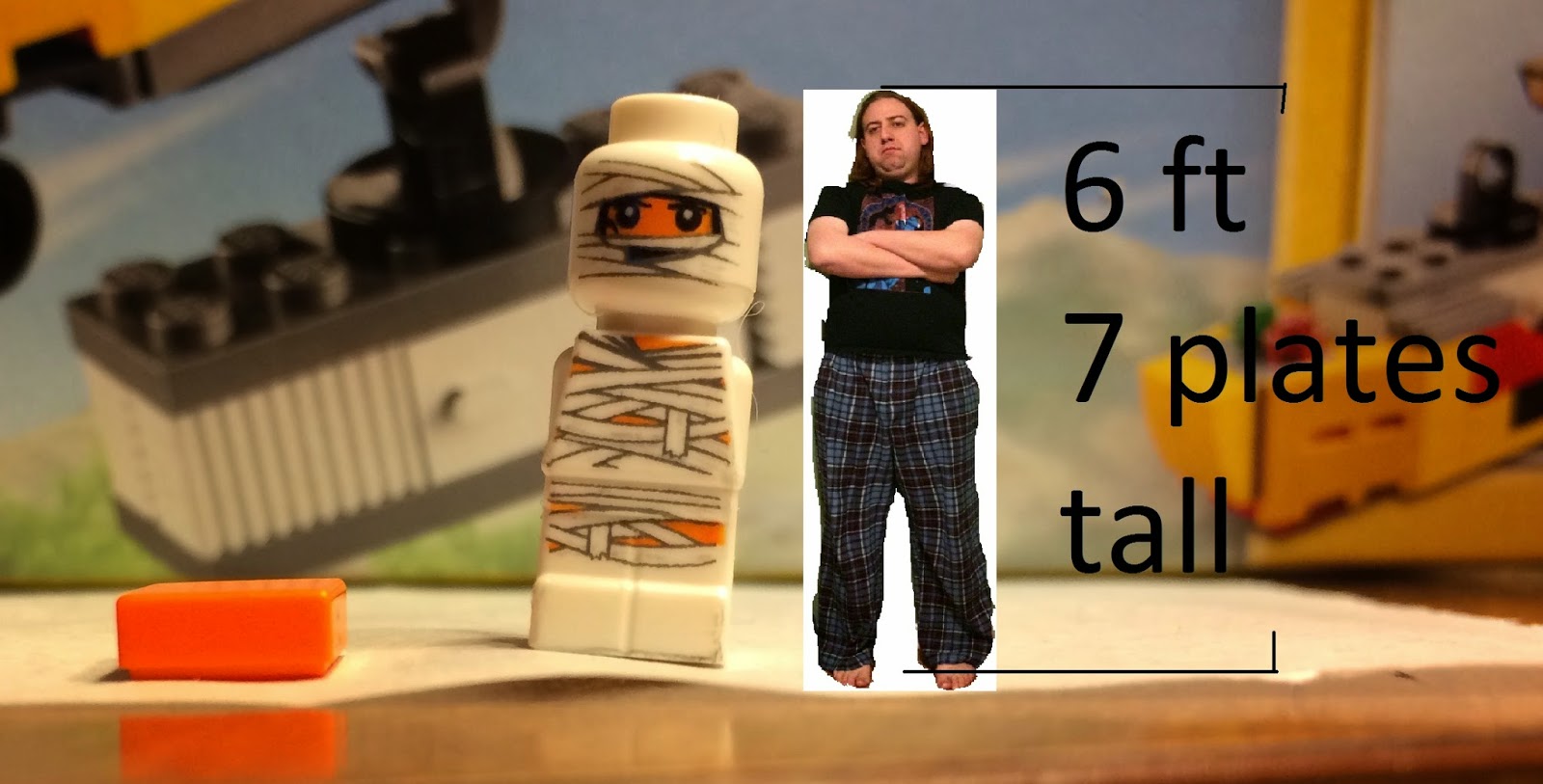 As we discussed above 7p is how tall a human is on the battlefield but what does that mean to everything else? Let's basic down to the most basic by starting with average human height at 5'10" (1.8 meters) but lets just round that to 6' (1.8 meters and humans will be taller in the future anyways).

So there is the low end, but let's take this to another common reference in the game: the chub. The chub is roughly 21 plates tall meaning it is a rough 18 feet tall or three times taller then the average human. That seems about right and fits well into the default setting for MF0 (of course feel free to make your own setting). 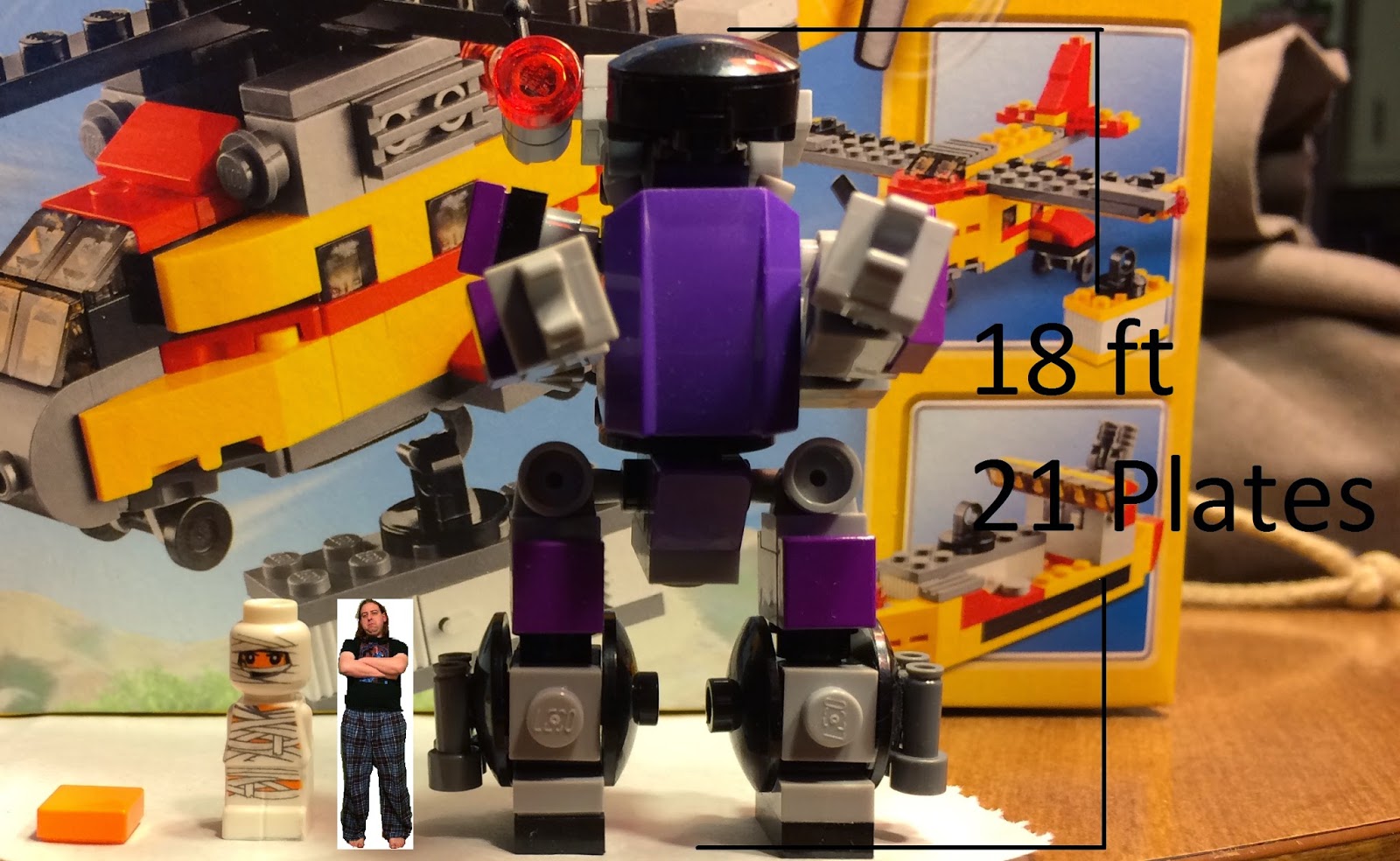 So we have people, the plate, the chub but what about THe Box?

If your interested in smaller scales such as 4p and below then you should checkout No B.S. Just A.B.S. 's entry about Scale as well.

-So You want to Play Minifigure Scale

Before I begin I will say this is just my opinion/research and has not yet been play tested. Anyone who takes this and tries it out please let me know how it went BUT Joshua tweeted a bit about the basics ideas I had and tweeted back this:

@Shades_Corvid A minifig with a hat or hair would come out just right, then! Your other scaling makes sense to me, too.
— Joshua A.C. Newman (@JoshuaACNewman) January 8, 2015


Take that as you will.

So I sized up the minifigure (12 plates) and started the math to figure out the scale and how things would need to change. Short answer is it got complex and what I would call silly. So I came up with this instead. Just double the scale and everything else then just call it minifigure scale.

So yes, 14p scale(5 inches per plate)  is what I think minifigure scale should be with the minifigure is two plates short just like the microfigure is one plate short. With that though everything needs to double as well.

The Ruler: Still 8 units long but unit is now 10 studs long. With that adjust play area (about 9 feet wide) and ranges with that in mind.

Cover: Now Begins at 6 bricks or higher. Stations are still not cover.

Cover Damage: Remove 12 pieces instead of 6 and I would stick with 2x2 brick as your common minimum size of piece and have 1x1 bricks used sparingly.