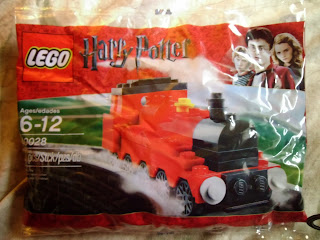 So when I was in 5 Below I picked up another set besides the Warrior Pack. This time we have the 'out of print' Mini Hogwarts Express. Thanks to Mantis King for our review system. Though this time around I think I will be rating on two fronts 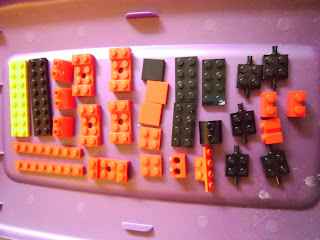 Can you build a frame, or frames, right away?
I believe this is a no but I think we have a great piece that can be used to set up one's battlefield. To me the train is in scale to the rest of our game we love and play. It might be a bit too long BUT after building it I think it be an easy adjustment to make it shorter.
Frame: No -5
Scenery: Yes +5 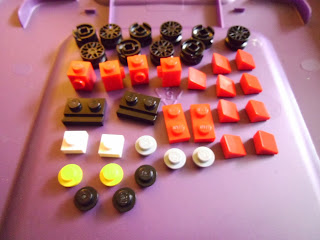 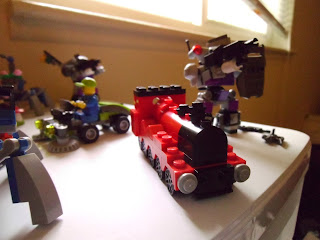 If you can't build a frame right away, does it have parts you should be able to put into use right away?
I am going to go with a yes on this one but it is scrapping by. There is only one key part in hear but still ones I have seen use in several frame builds and it also be a good base for a wheeled frame or scenery piece.
Frame: Yes +5
Scenery: Yes +5 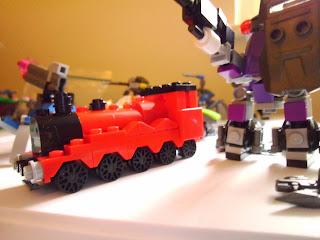 Does it have more than a handful of immediately useful parts?
So here we have my great divide get large enough for another split in decision.
Frame:  No -5
Scenery: Yes +5

So Now the results.
Frame: B
Scenery: A+

Well that is a first for me, getting an A+ but it is on the scenery side of things. Of course that is at the 5 Below price and I am looking forward to putting it on a table sometime though it would suggest that I need to build some tracks and cars for it...


Posted by Dark Cloud Blogs at 3:44 PM No comments: 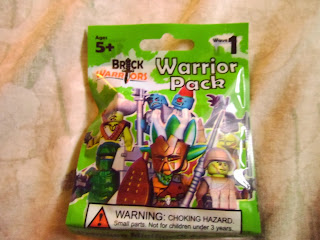 So I was browsing through 5 Below when I came across this little pack of third party LEGO accessories. They are called Warrior Packs (made by Brick Warrior) and this is currently Wave 1 with 10 varieties but these are not random packs. In fact the back of each pack is clear so you can see the item inside. 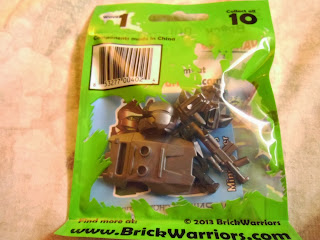 I was curious about them thinking about their use in the game Mobile Frame Zero: Rapid Attack. Given that I picked one that looked spacey and brought it home for this review. First I want to say the quality of the plastic is great, about equal to LEGO products. 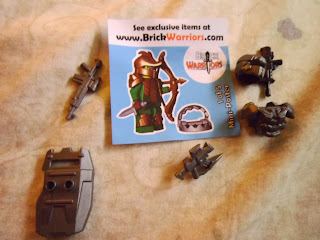 So my little pack came with three guns, a shield, a body cover piece and a helmet. The pack cost me $2.99 so that was about $0.50 per piece, very roughly. They fit well with my model LEGO minifigure (a knight from my random pack collection) which means they should fit well with a Mobile Frame as well. Just because I was curious again I went ahead and tossed that shield onto a Chub just to see how it look. 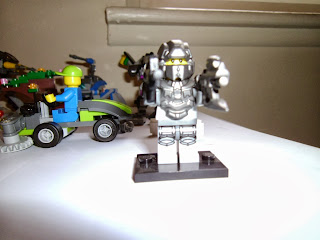 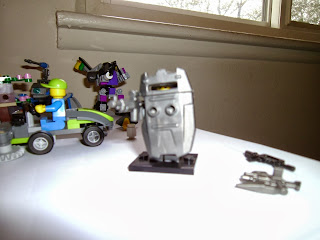 Over all I am a bit on the fence about the packs. If you are a fan of customizing minifigures then these are most likely great as they seem cheaper then buying the parts individually from Brick Warrior's website but as far as Mobile Frame Zero, maybe. I suggest if you find a set of Warrior Packs just look through them and see if anything in their windows catches your attention. 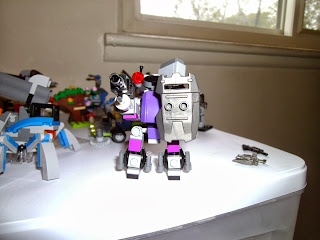 Posted by Dark Cloud Blogs at 12:50 PM No comments:

This set just made it into the prestige Mantis King's Good Sets for Parts list (6 if we are counting) so I figure I get this review done. Again here are our requirements and moving on! 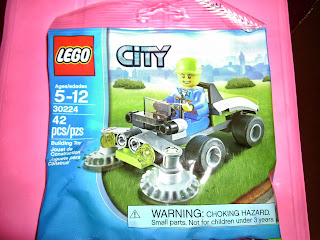 Can you build a frame, or frames, right away?
I don't think you can so No; -5 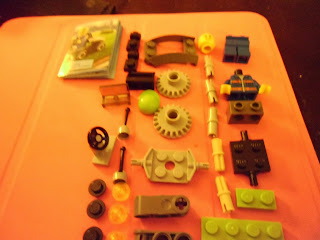 If you can't build a frame right away, does it have parts you should be able to put into use right away?
This is very much a yes and why I bought it. I picked it up during a BOGO 50% off at Toys 'R' Us when I also bought more of these. I was planning to take the 'lawn mower blades' and mounting them on the sacred Umbarran MHC but so far I have failed to get something I like. Anyone have any ideas? Anyways, +5 to the Parts House. 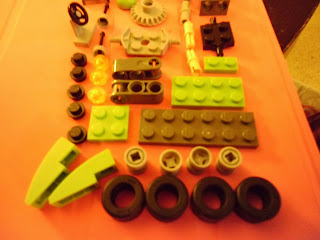 So here comes our total: 5 which gives us a B+ which is a fair rating for a bag of pretty much raw parts. 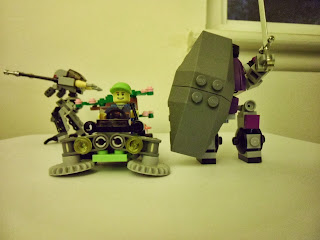 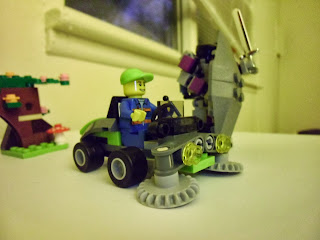 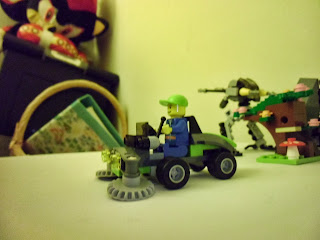 Posted by Dark Cloud Blogs at 7:26 PM No comments:


Sitting on this one a bit because I picked it up at a Flea Market but I have not seen it in any stores. So why now? What has change in the world to make me do this review? Well Toys R Us is having another one of their LEGO build events and during that weekend the Iron Man Drone will be a free poly bag with purchase that weekend. So, let's get started.

As usual we are  using the review system established by Mantis King (insert fanfare). 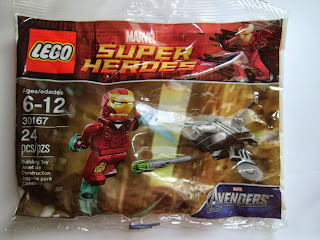 Can you build a frame, or frames, right away?
When I first got this set I would have said yes but now that I think about it and seen other sets I am more leaning toward no now. The drone would make a great drone for melee dice for a frame but it is not frame material on it own BUT I have half the mind to slap a pair of legs from a Hi-Leg onto that drone and use it! 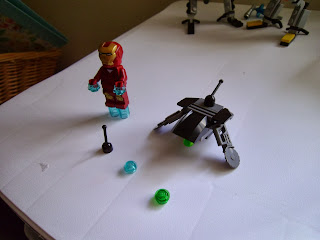 Is it below, at, or above the golden ration?
Well as I said earlier I got this from a flee market for only $3.50 while the LEGO store has it for $4.99.
Bag contains 24 pieces so we do a little math and...
Flea Market price gets us $0.14 per piece so that is a clear above for a -10.
Store price gets us $0.20 per piece getting us even more above for another -10.
Mind you I love the buzz saw cutter pieces in this set and this is why I got them. They seem rare piece and so if your after them the hit might be worth it or you can try Bricklink. Oh wait, there it is right here. Looks like you can get them for 2 pennies each...oh this is awkward. 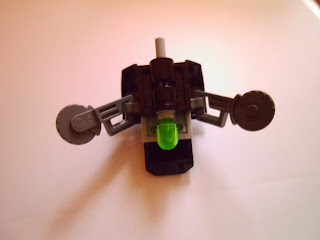 If you can't build a frame right away, does it have parts you should be able to put into use right away?
This is a clear yes but just very few pieces in the bag. So +5 points for House Stark. 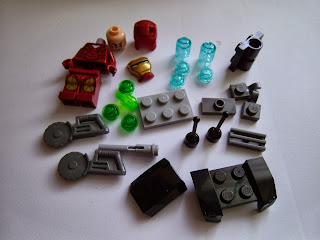 Does it have more than a handful of immediately useful parts?
This is borderline  specially with Stark/Iron Man being in the bag but I am going to say yes. Let's be honest though, if the previous question is a yes, it is hard for this one not to be one as well. +5 points!

So now for our results, drum roll please!
We have a -5 which grades this set at a B- and given the ratio if bought in store I be willing to call it a B. Though if you can get it for free, go for it.

Posted by Dark Cloud Blogs at 6:46 AM No comments:

So today (when this post dropped) is Nation (USA) Coming Out Day and with that date I started a tradition on Facebook where I come out again and again on this date. I started about two years ago, coming out as transgender the first year then the second year pinpointing what that is for me (bigender and/or gender fluid). This year I included my more flexible sexuality on top of everything else.

Why do I do this every year and well for the simple fact is we never really stop coming out. Some like to think it is a big flashy event, we send out inventions, RSVPs, get on a stage, turn on the web feed and tell THE WHOLE FREAKY WORLD OUR BUSINESS but this is far from reality. We have friends, family, co-workers, pets and whoever else we have to deal with which we can never tell all at the same time or want to tell at all. Just because someone comes out to one group doesn't mean they will come out to others and then sometimes you still might split those groups up. It is just a complicated mess.

So that is why I post it every year because it never stops and hopefully one day will will never have to come out, things will just be said and we just all get it.

Though this is not the end of this little old blog entry because speaking having different groups we have to come out to, I have not come out at work about anything. Now I have selected people at work that know but these are friends. Today giving what day it was I was planning to come out at work during lunch but due to timing and work demands, everyone wasn't present so I chicken out.

Though I also realized this isn't a big deal because it didn't have to be today and it doesn't have to be a big announcement, it can just be part of conversation which I think can be better at times. The thing is I have had plenty of chances to drop in past talks but instead chose to avoid it in some fashion. I need to stop doing this and just let it happen. It would be best for me and ultimately make some of my co-workers look at things a bit differently. Could make some things awkward but well...that isn't my problem. Out!
Posted by Dark Cloud Blogs at 6:28 PM No comments: