In my last post you might have noticed the appearance of what I have named 'The Capital Standard'.

As you can see, The Capital Standard is a very patch worked Mekong-Class carrier which is a Capital scale ship for Intercept Orbit. Guess she was built in a hurry with whatever parts they could find.

So, why do I have the Capital Standard? Well, comparison of course! Right now for the community this is the only 'canon' ship we all have access to so I decided to use it for scale in my ship builds; much like the CHUB for frames. 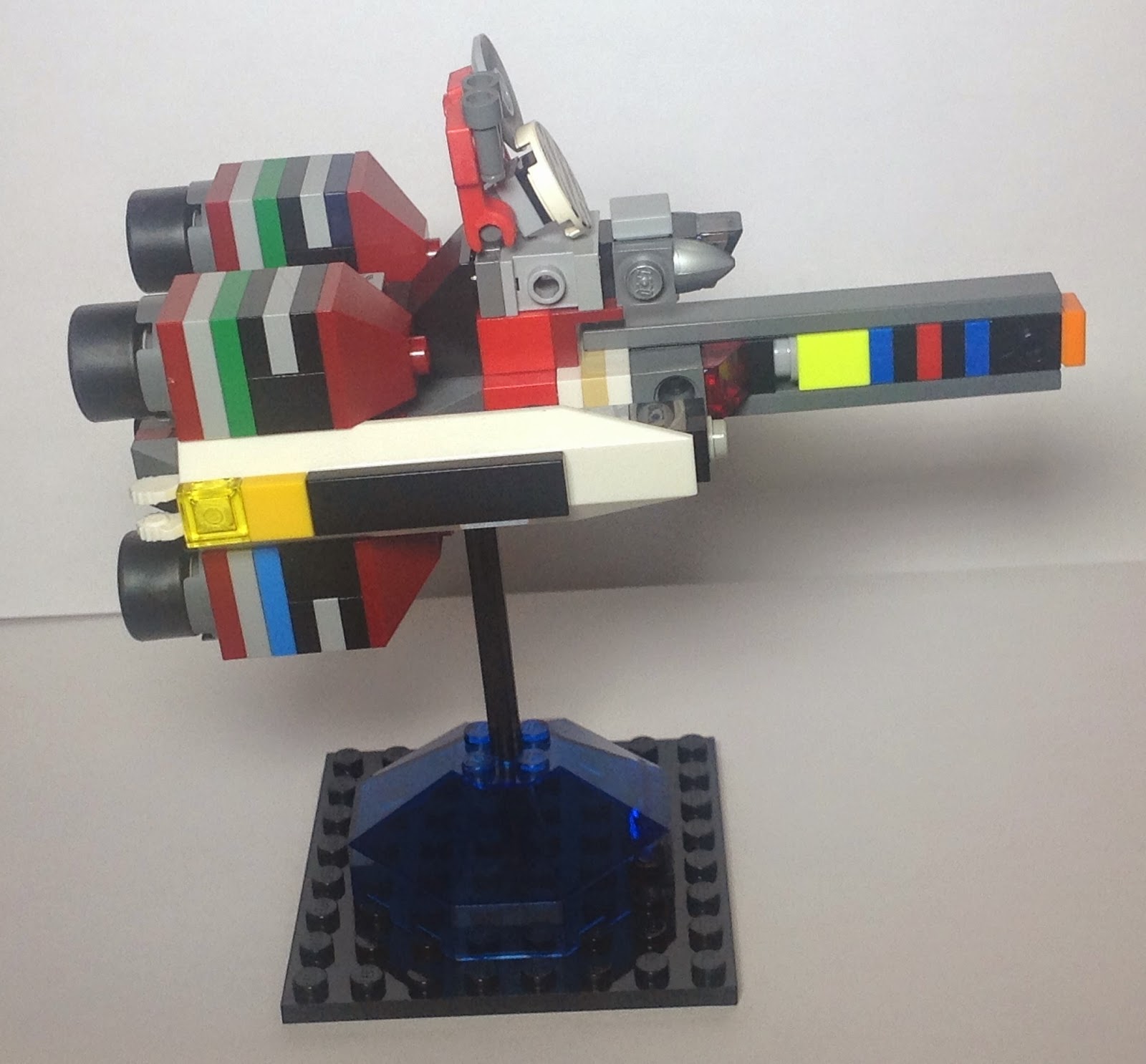 Why the name? Well, I figure it pretty straight forward. It is a capital ship and is our standard right now so there you go, Capital Standard. Once we get access I do have plans to make a Frigate Standard. 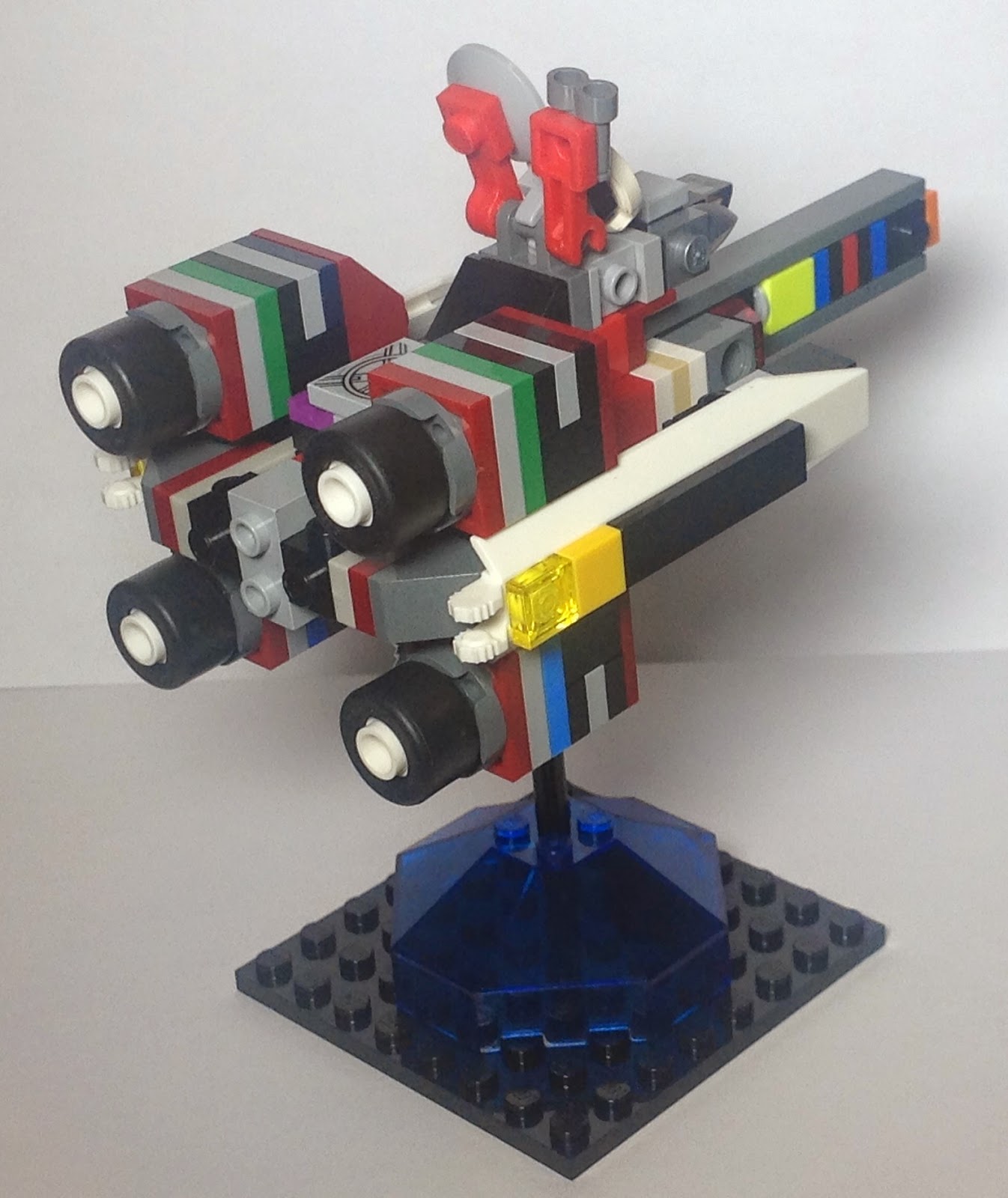 Speaking of Standards, instead of pulling from my 'homeless' Purple Wyrms all the time just having a frame built just to be my CHUB Standard. I was thinking of making it one solid color but I also got the suggest of having it be a UMFL. I like both ideas. 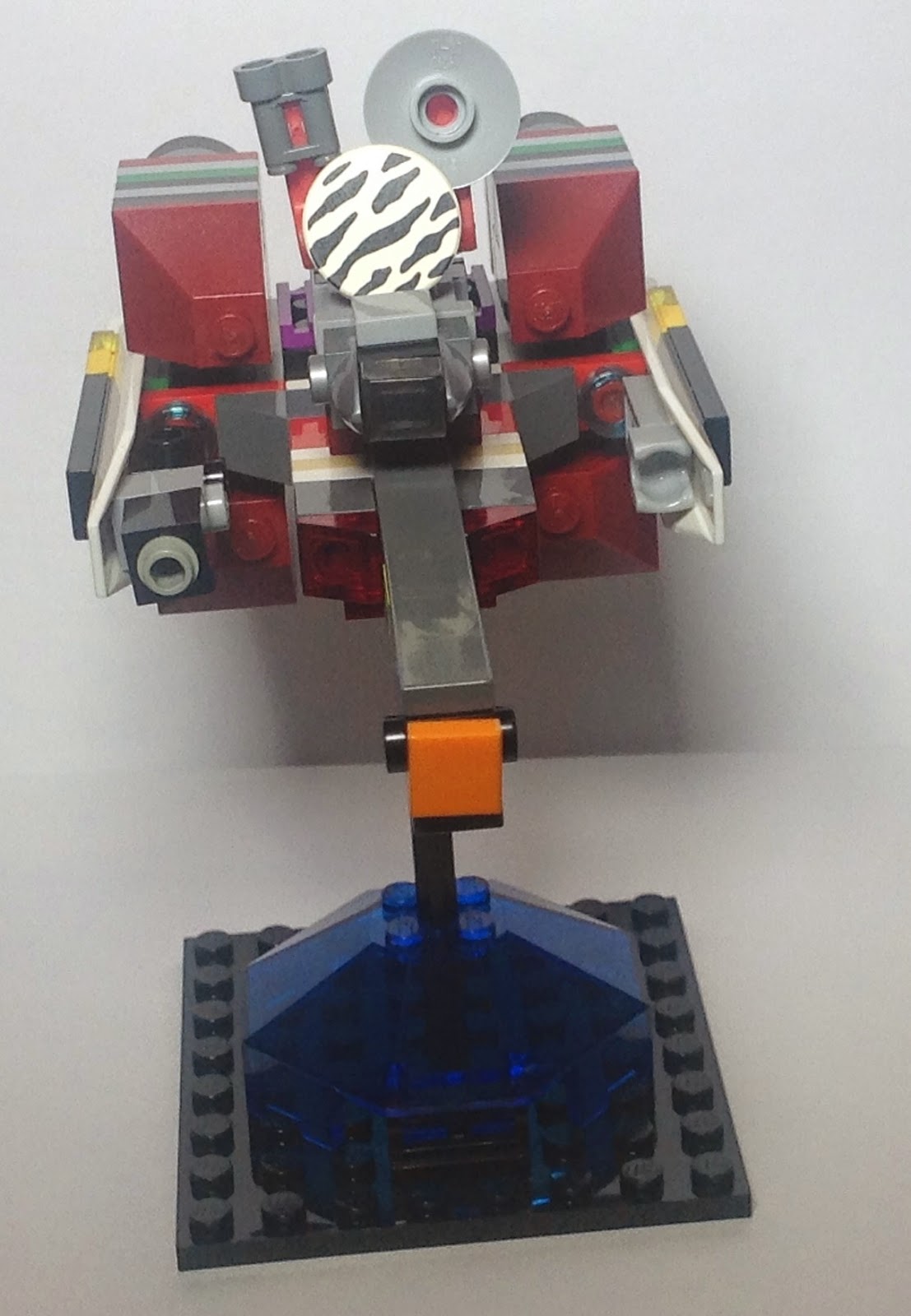 Of course this makes me think about scale and space requirements for builds, both for Rapid Attack and Intercept Orbit. I think this might be a future post, though I think Mantis King as also talked a bit about it on his blog but I can't seem to find the post at the moment. 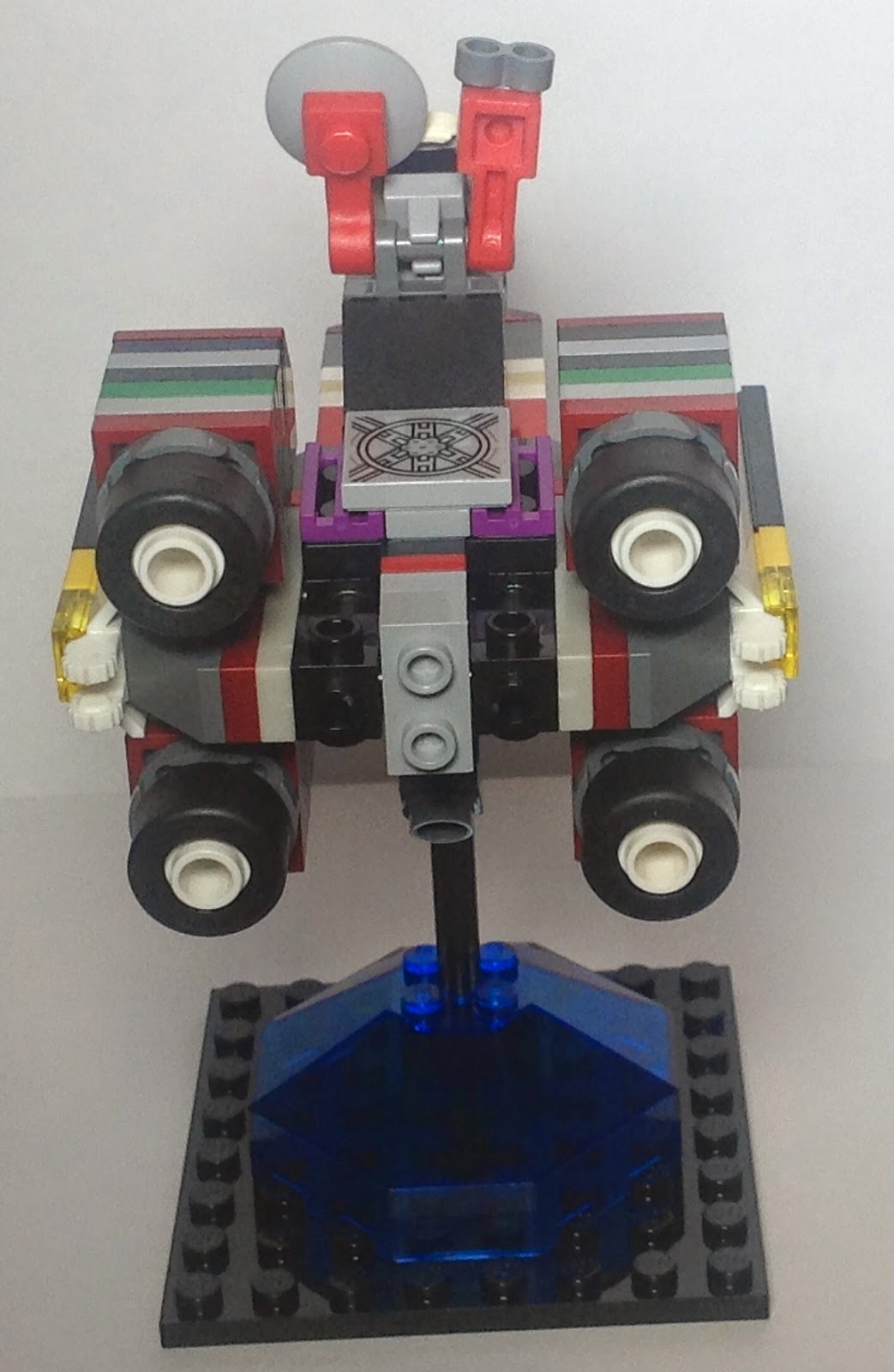 Well, I hope you look forward to seeing this new Dark Cloud Blogs Regular around in posts, though she has some retrofitting in her future though that Zebra Disk...that will have to stay.
Posted by Dark Cloud Blogs at 1:54 PM No comments:

Well; this should be interesting. The Booster Frame set is not a usual set from Mega Bloks, it is actually three sets you have to buy with them you will get the parts and instructions to build it. Today in one post we will have essentially four reviews; our three sets to make the Booster Frame: UNSC C&C Console, UNSC Hanger Deck & Forerunner Terminal; and a final review for the Booster Frame itself.

Above we have the boxes for the three sets that make up the Booster Frame and as you can see if you put the sides together you get to see the Booster in action! Alright, let us do this in order starting with:


Can you build some sort of creation right away?

Outside of the initial creation in the box, no. I stared and stared but could not imagine anything! Maybe I had an off day. The console could possibly work for terrain, maybe so going with a scratch by 0. 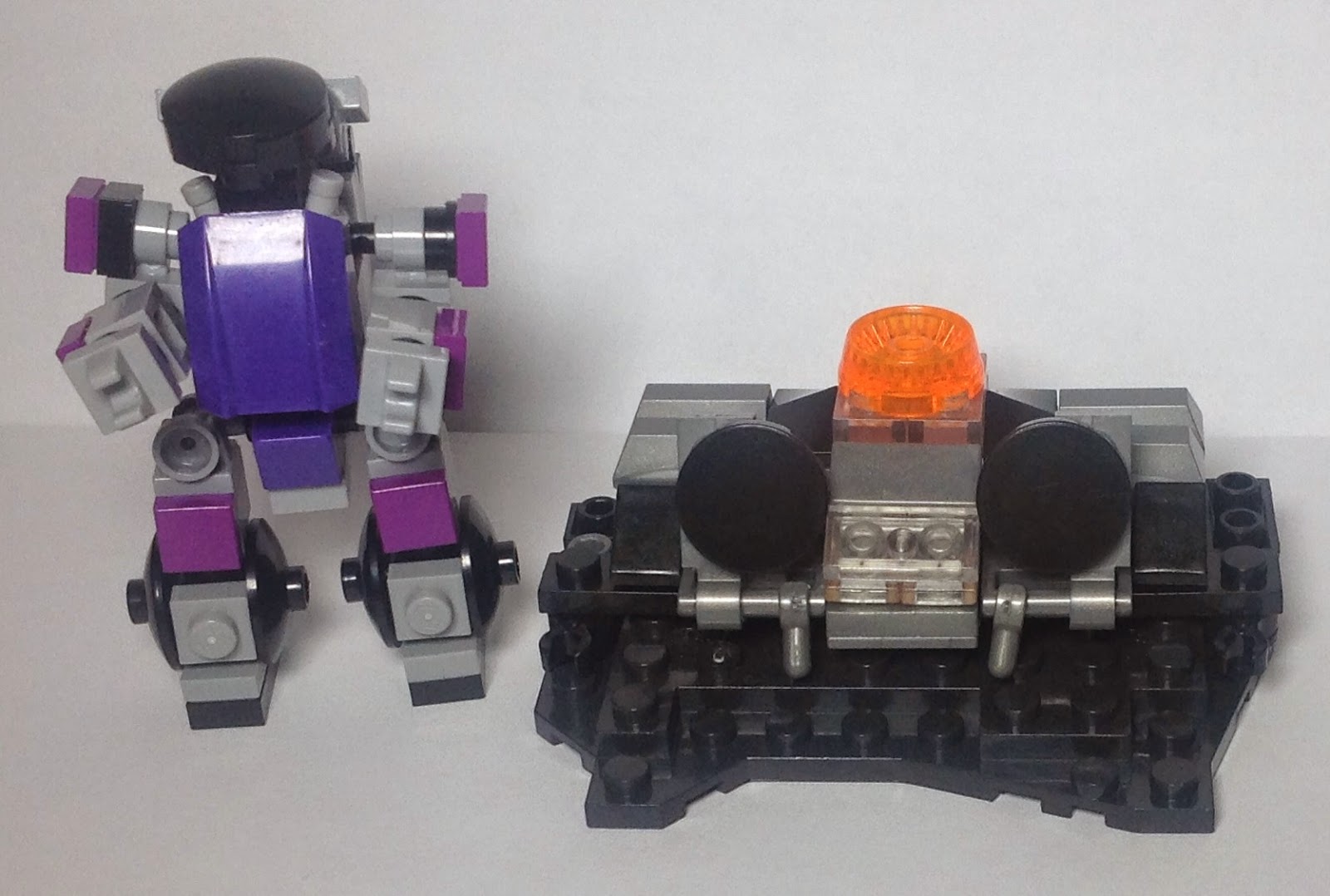 Is it at, below or above the Golden Ration? (10 cents per part)

As I can tell the standard price should be $9.99 so we divide that by 60 to get 16 cents per piece! Ouch, but not that surprising for a Halo Mega Bloks set; glad I got it on sale. Though there are some unique parts to these set but we will take a look at that in a second. Minus 10 points.

First, I am going to say that I forgot to take a pic of the marine, all well. It is just too late. A few cheese slopes, some interesting sloped clear bricks, the orange turbine piece keeps catching my eye (I can't help but think Gipsy Danger inspired frame) and the... ingot bricks also look interesting. I think the ingot could be used for interesting armor or on a shield. Also the guns might be could too...if they weren't clear. So I am going to go +5 with this question.

So for our Console we have a score of -10 for a C+. Very harsh and one of the few low grades I have given but my guts says this might be setting a standard for this post! So unless you are after the Booster Frame or the unique parts in it this set is most likely not worth your time.

Um...yea, more of the same on this one. I got nothing but again the standard build might make could terrain? 0 points given but not taken!

Again this is certainly a yes. Those cyclinders could prove useful or the 3x2 places with the wings could be armor or how about that 2x1 place with the bars? Got some weapons or barrels that could be used for guns or some...circle plate grate looking round pieces. Giving this a +5

This one is better so...I will say yes for this one giving it a +5


The rating for the Hanger Deck is based on a break even 0 for a score of B making this set a bit better then the previous one, and has some more of those cool parts but no ingots.


Moving to our third set:

I felt bad at this point that out of three sets I got nothing but again could have some possible terrain? 0 points 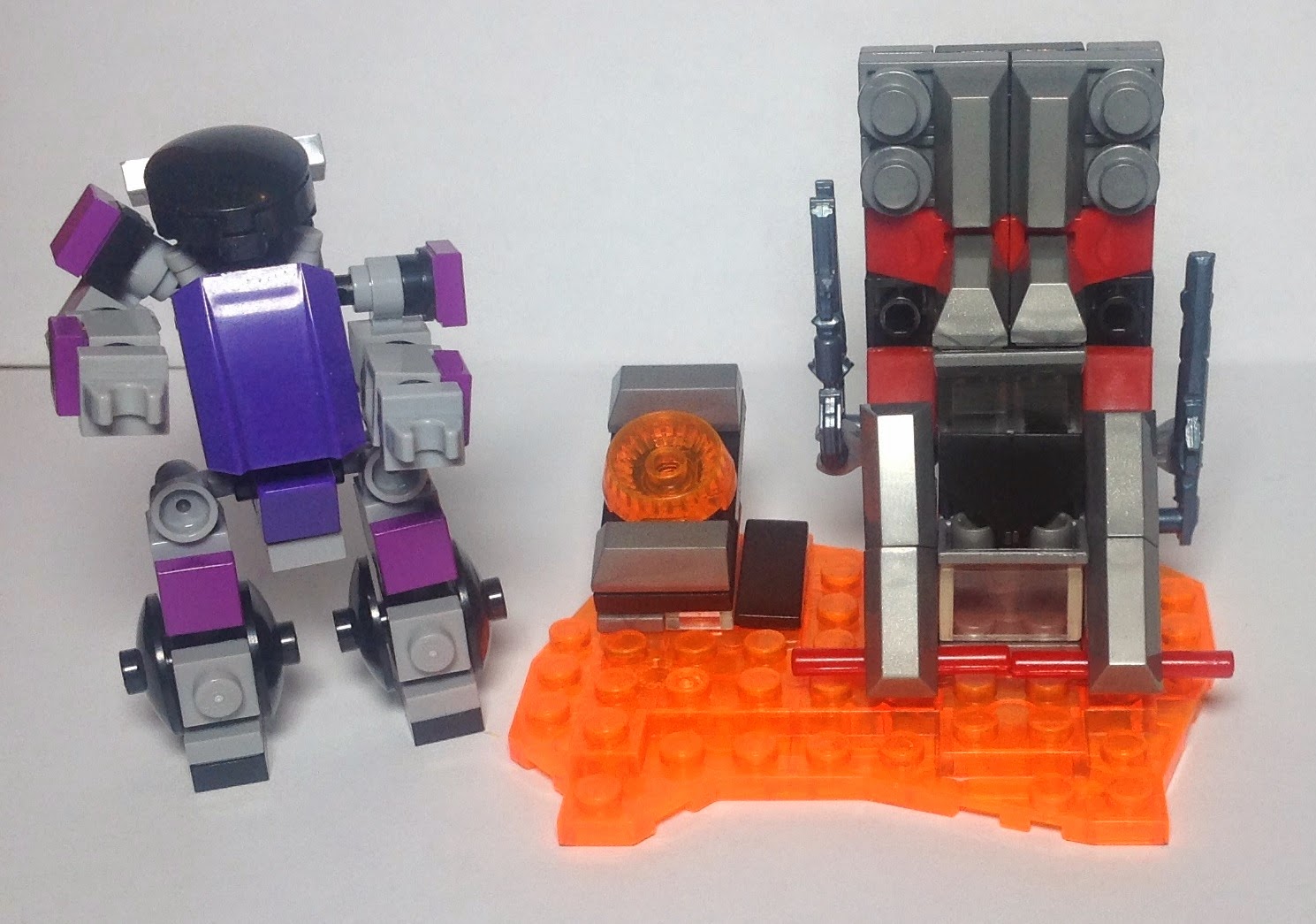 Some plates, and other interesting parts from its brother sets above except for that 1x3 plate with a bar. Curious piece that one. +5

I think there is a bit more potential in this set as well so plus 5 points!


Drum roll please; another 0 total for a B set.


So that seems to be a B- average over all but lets take a closer look at what together they can build!

Even with all the parts combine I still couldn't think of any thing costume so this will just be all Booster Frame, sorry folks. 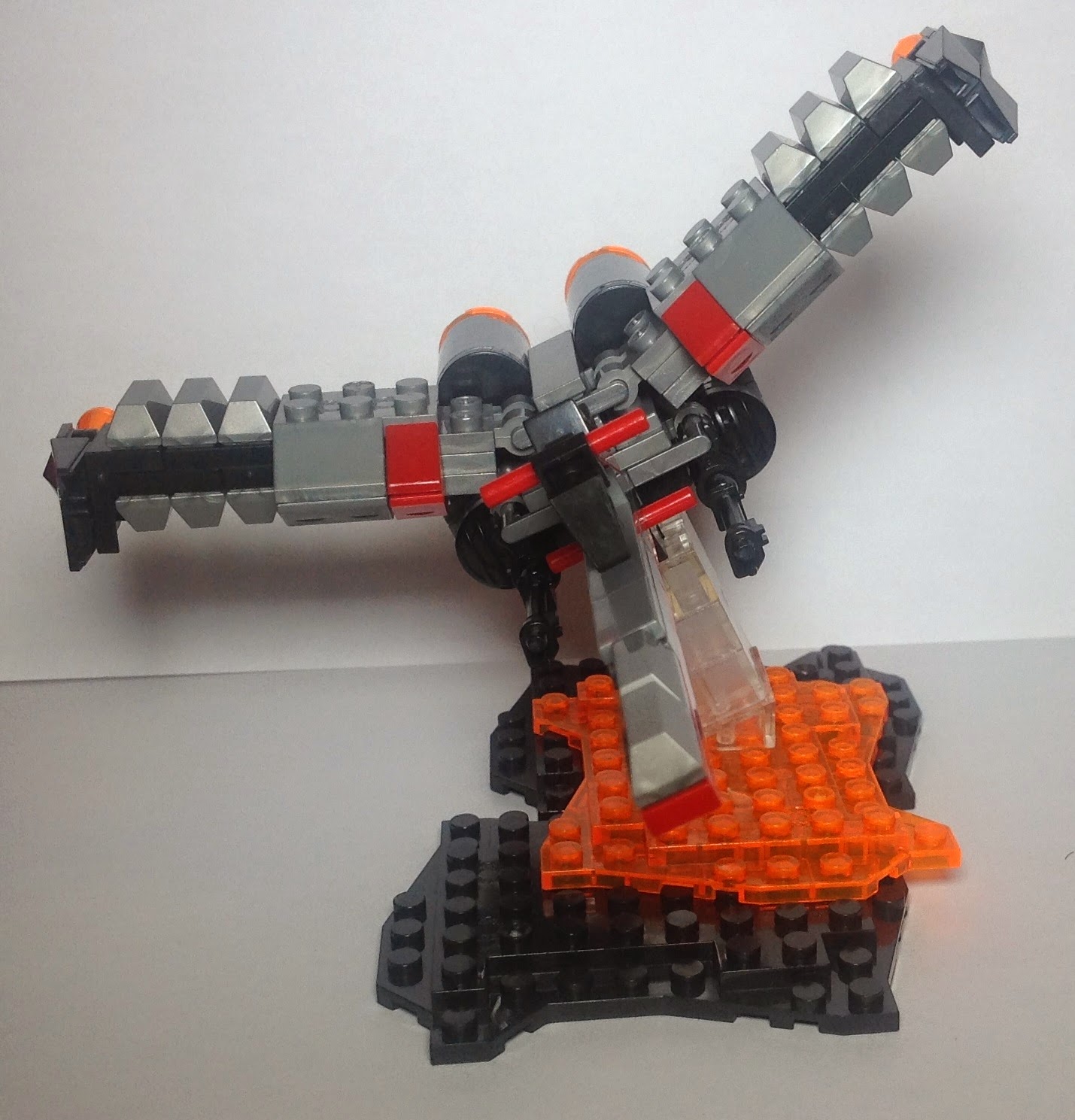 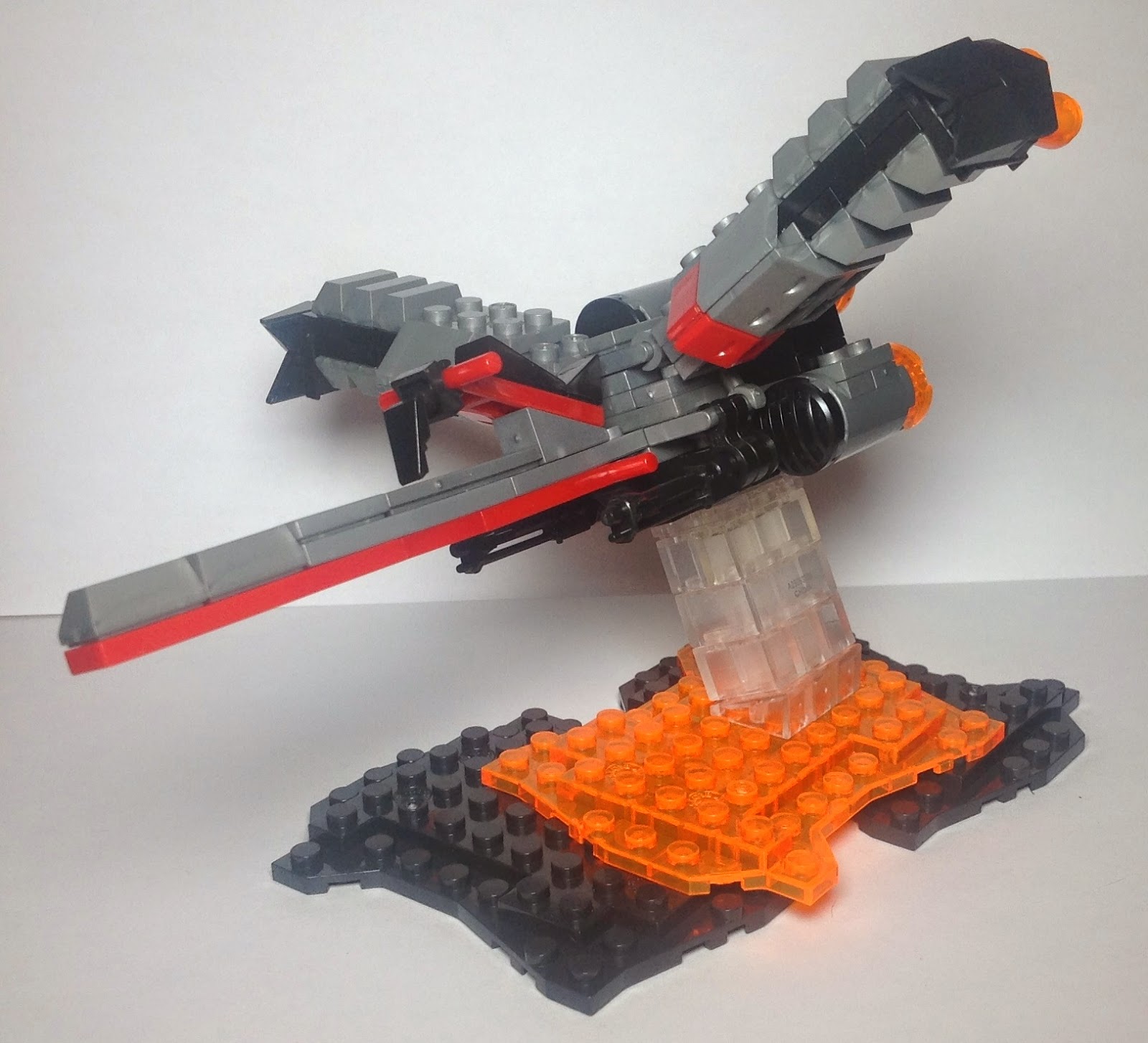 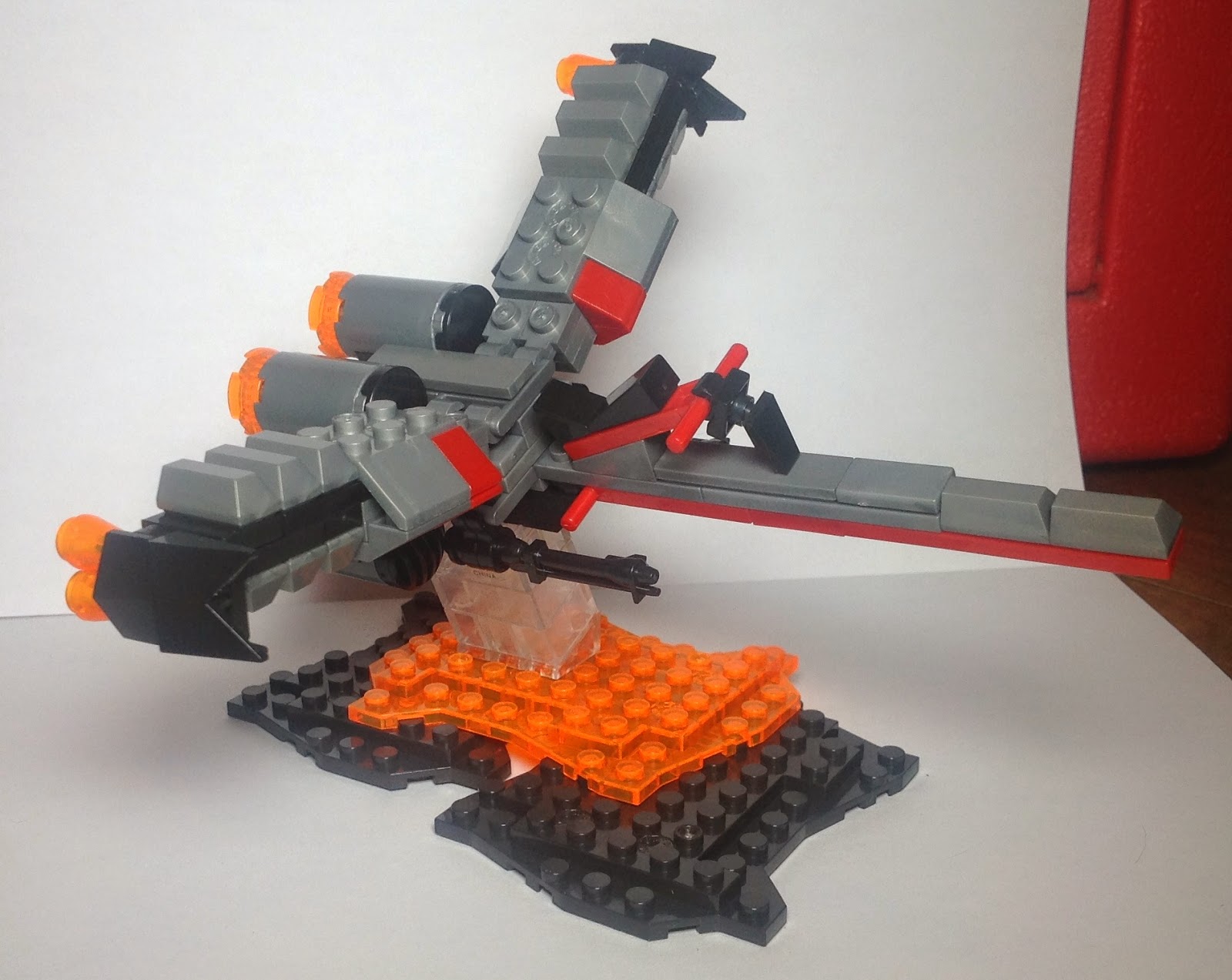 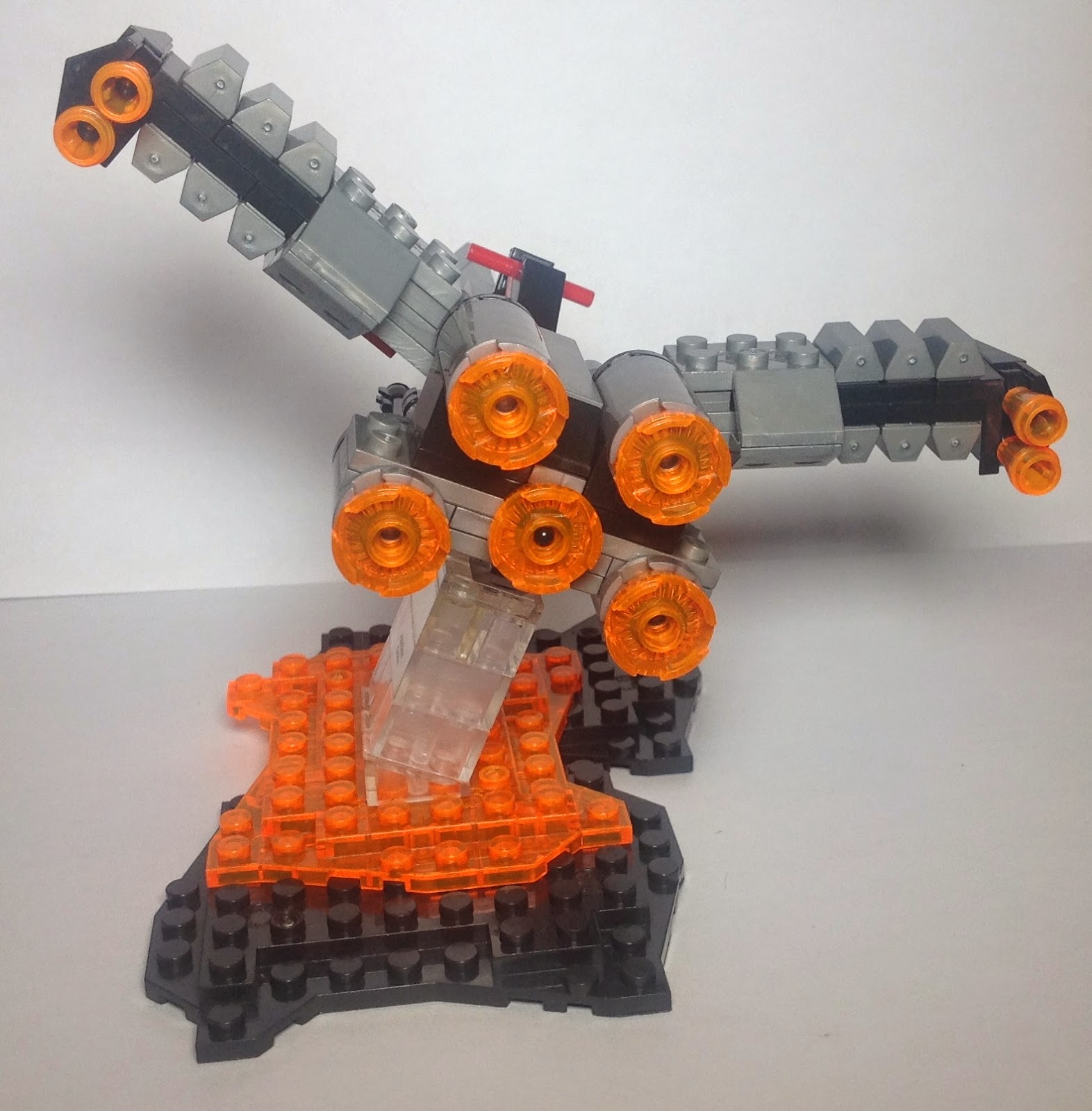 Certainly looks interesting but certainly can't use it as is for Rapid Attack. 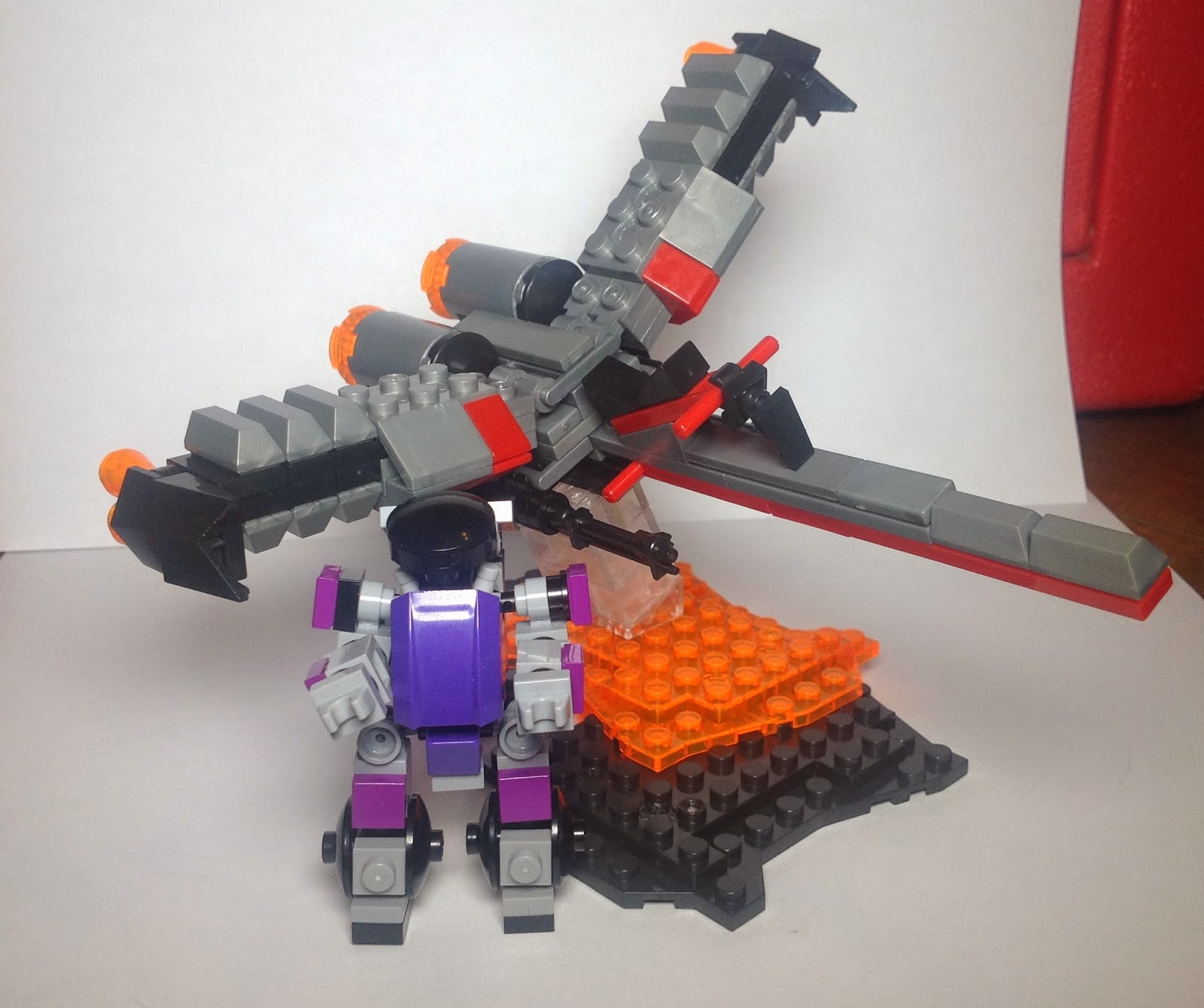 Also as is certainly won't work for Intercept Orbit. 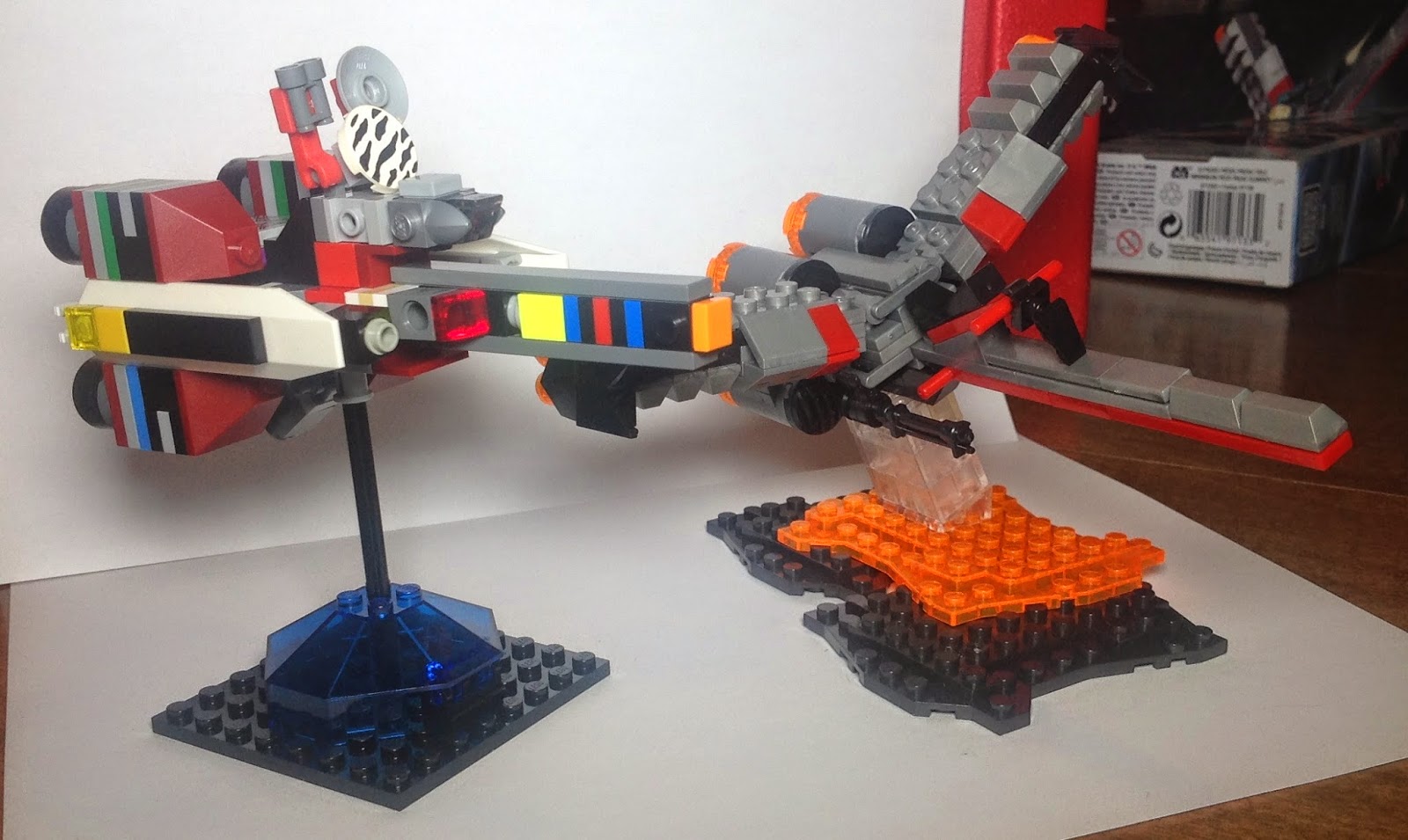 It is both two wide and long along with needing a different base. With some modding in the design though she might be usable as perhaps a Capital Ship?


That was a big review! Hope it was informative and entertaining!
Posted by Dark Cloud Blogs at 7:22 PM 1 comment:

Along with my growing interests/hobbies is photography. Generally speaking I do have a bit of a theme to my photos which you might be able to guess but there are a few exceptions to the rule that I really like. I like to take more time to do some more shoots.


Thank you for your time.
Posted by Dark Cloud Blogs at 1:23 AM No comments: 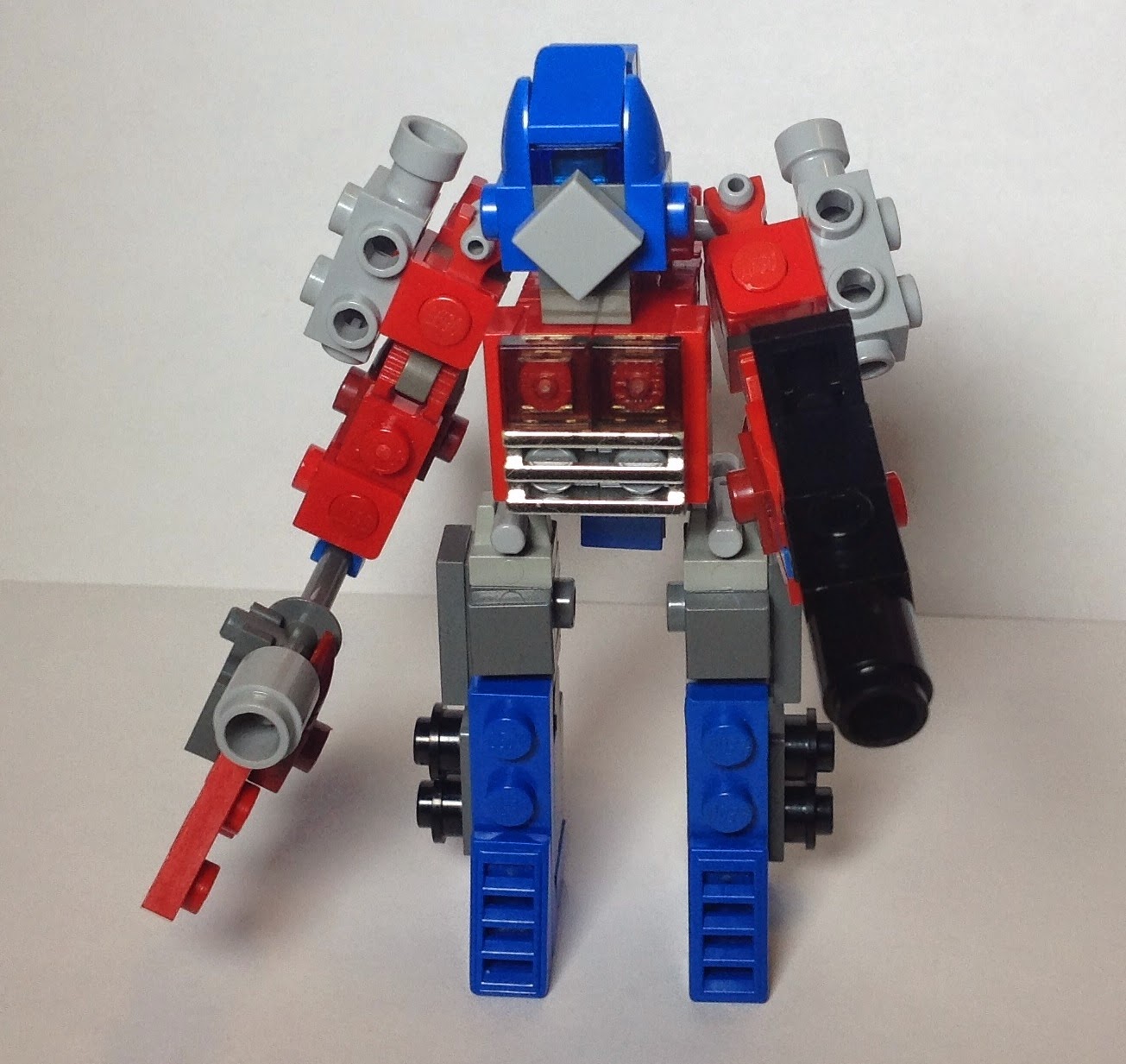 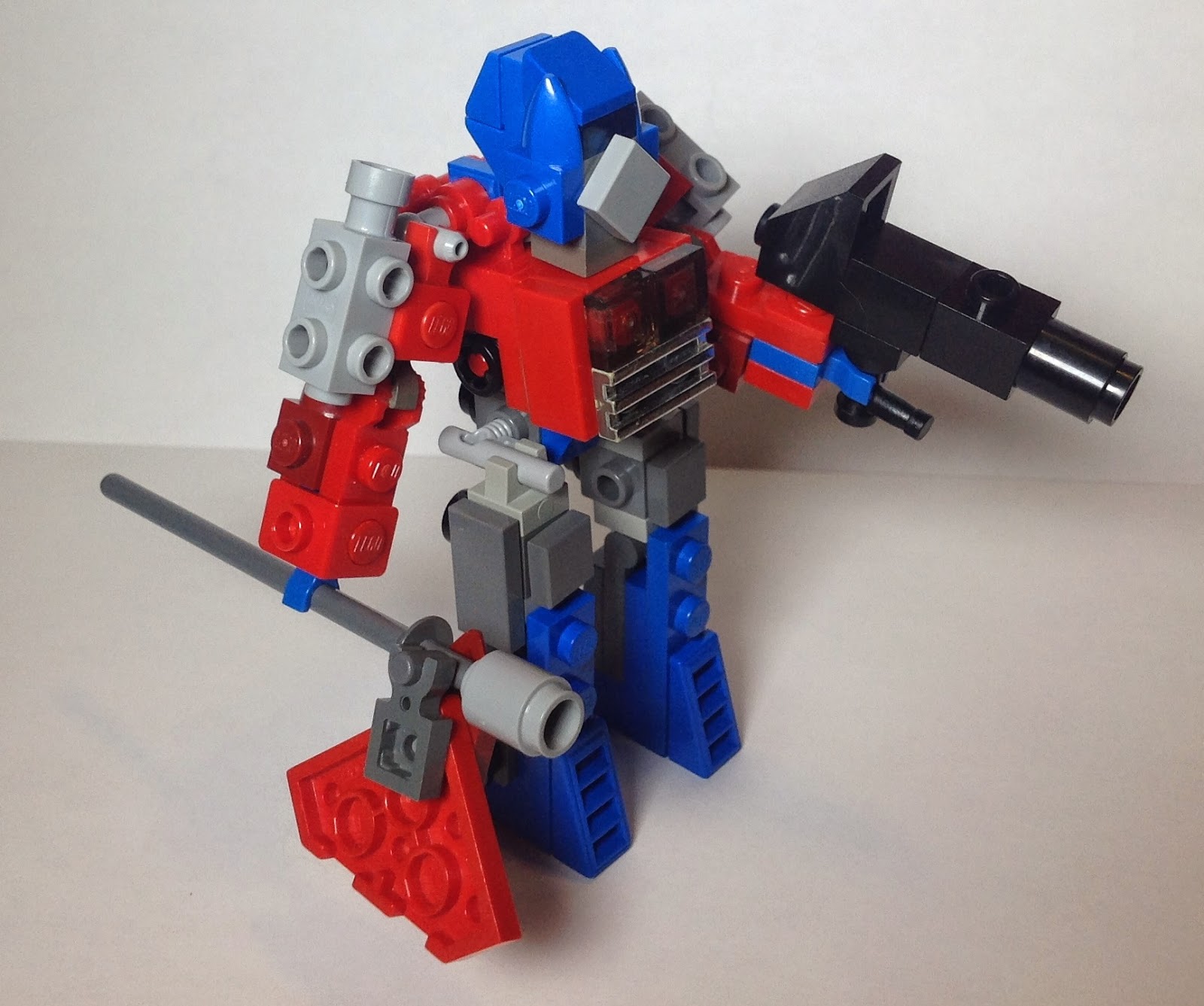 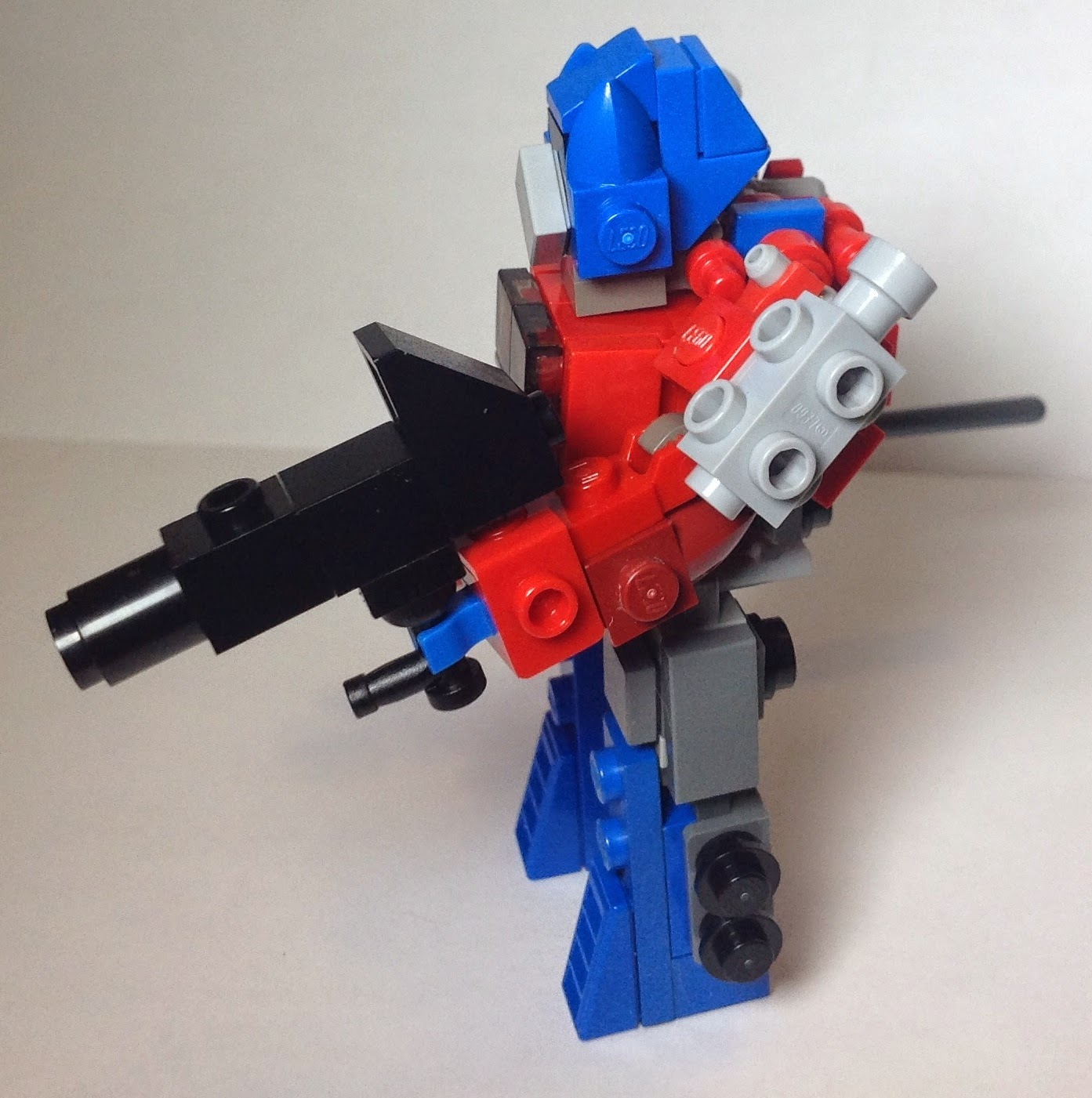 So, in the end I just wanted to share this awesome Prime Frame.
Posted by Dark Cloud Blogs at 7:10 PM 2 comments:


Here we have one of the sets aimed to be a bridge between Duplo and the other LEGO sets. I will be honest, I bought this for the box and for two specific style of pieces but we will get into that a bit later.

This set is mostly bricks aka terrain and maybe if your clever enough a station but I don't see you getting a frame or a spaceship out of this so this will be one of my more 'open reviews' instead of using the usual system.

So, back to the container. Yes, it shaped like a giant Lego brick but narrows on the sides instead of being straight like other theme containers we have seen. It clearly design to stack with other Juniors sets. Also the set that comes with it doesn't take up much room inside it either. See below: 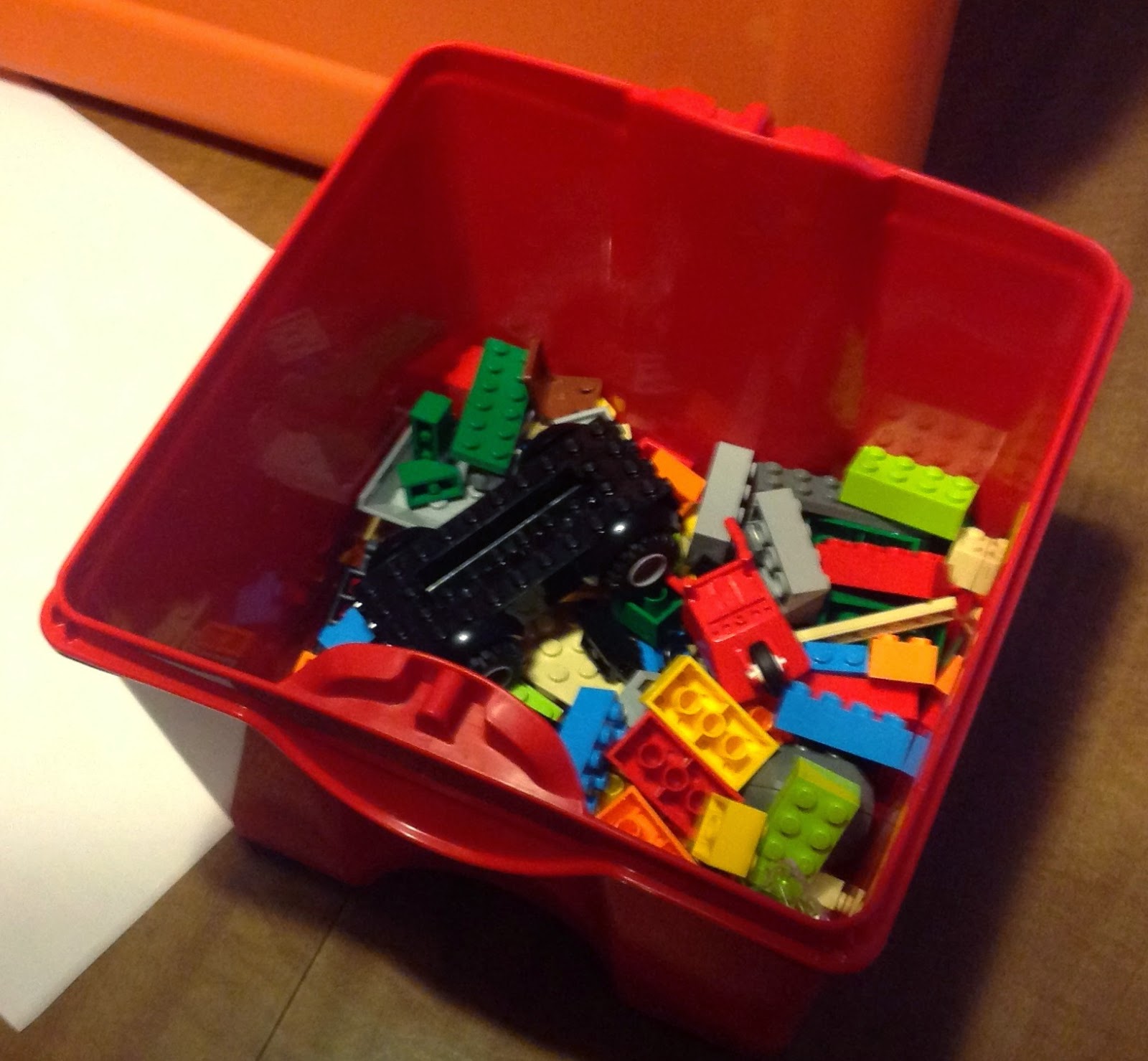 It comes with two sets of instructions, a first build and a rebuild. I am going to show only the build one and leave the rebuild for you to discovery. 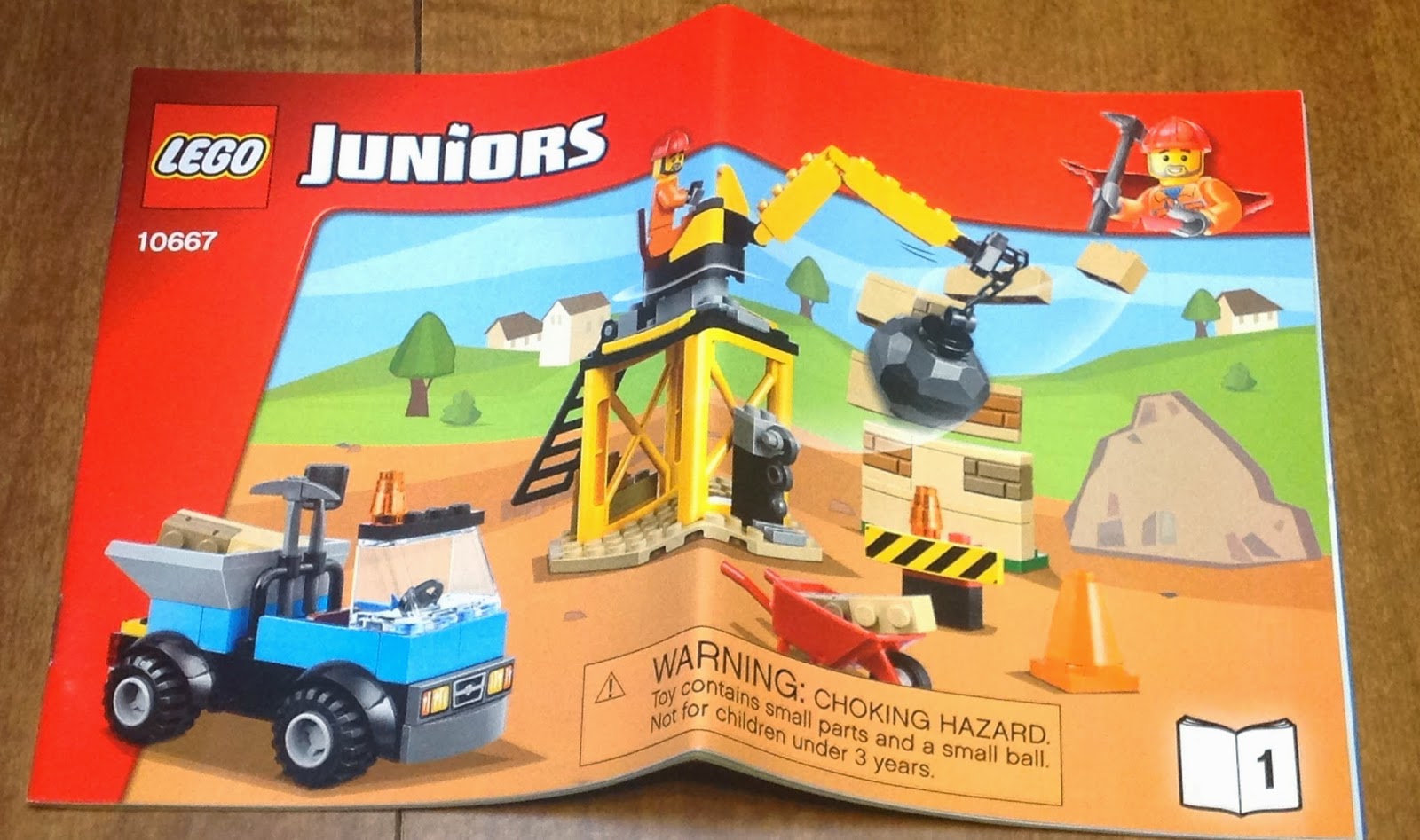 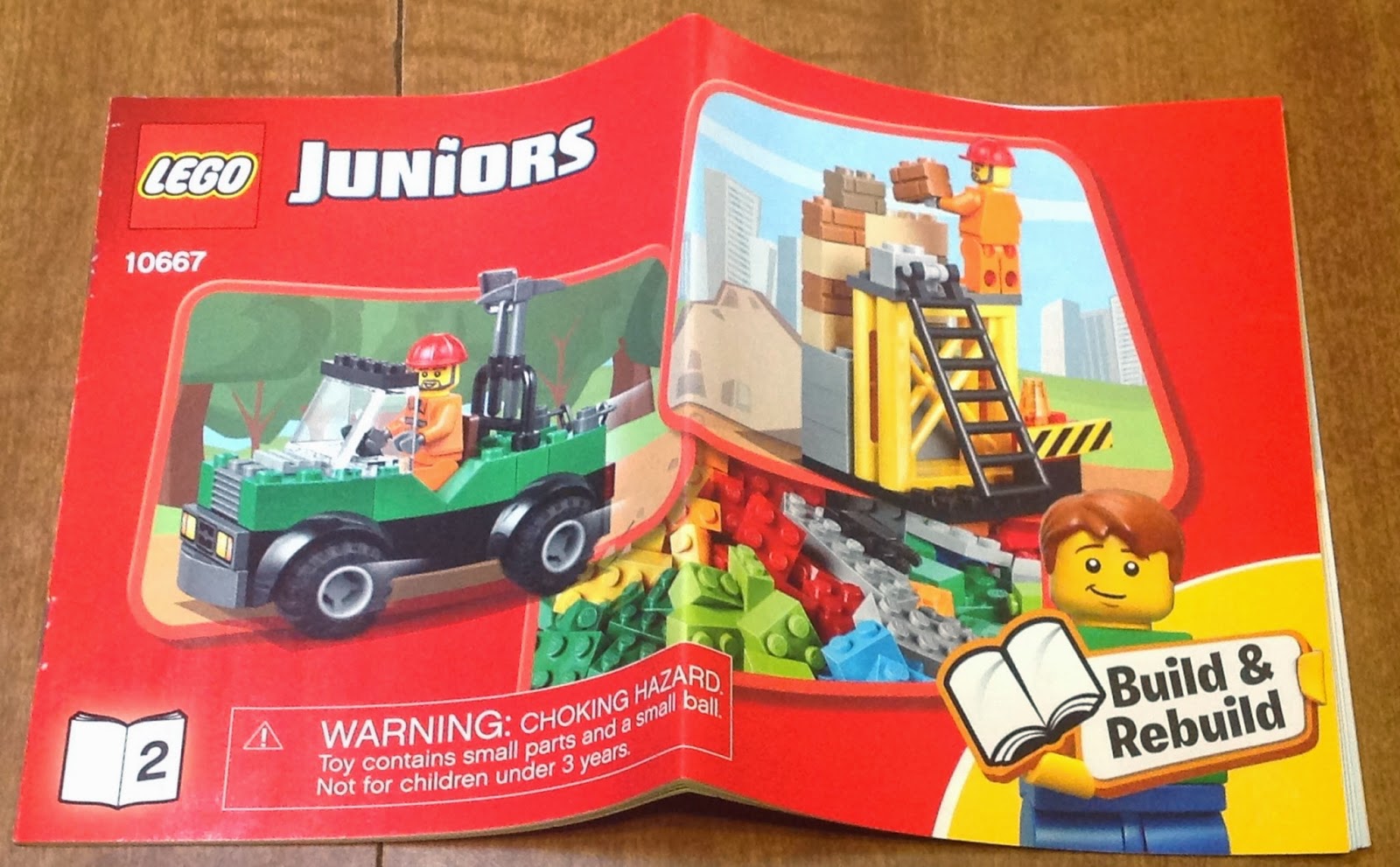 This is how you will find the contents: 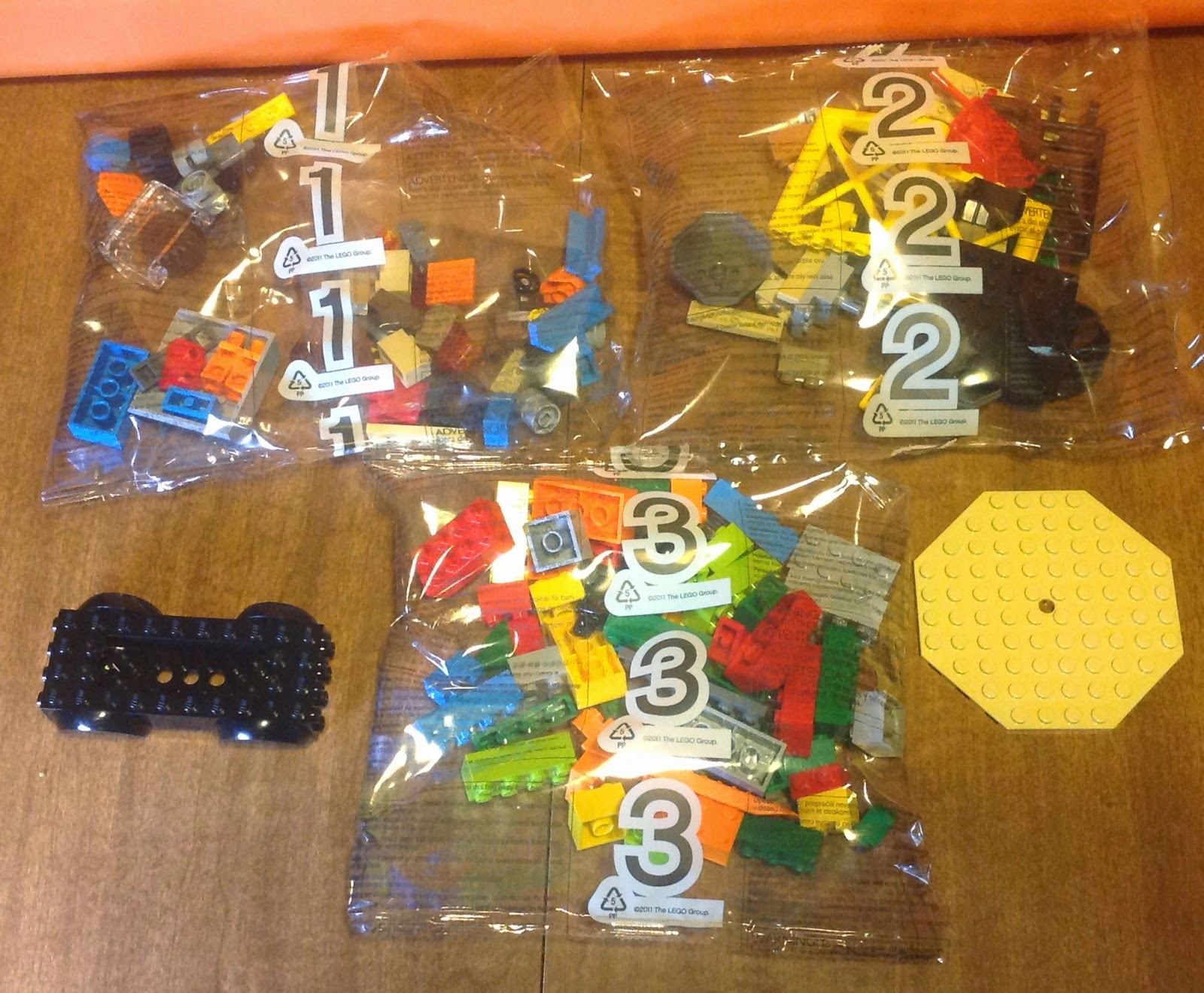 The bags are numbered for a reason, 1 and 2 are builds while 3 are the extra bricks for fun. Now lets get a closer look of the pieces.

This combines with the big black car piece to make a truck. There are a few good pieces here for frames or spaceships but not in amount. Of course the shovel or pickaxe could be fun weapons for a frame.


A few fun pieces for frame detailing, or those masonry looking breaks could be fun for stations or terrain. Of course the chain could make a weapon and don't for get the hinge bricks for rulers. Two bad it only two of the 1 x 4 in the set. This bag makes the wrecking ball.

Here is a closer look of the masonry bricks, I like these and wish there was a set in large number. Could be use to make brick homes or something. 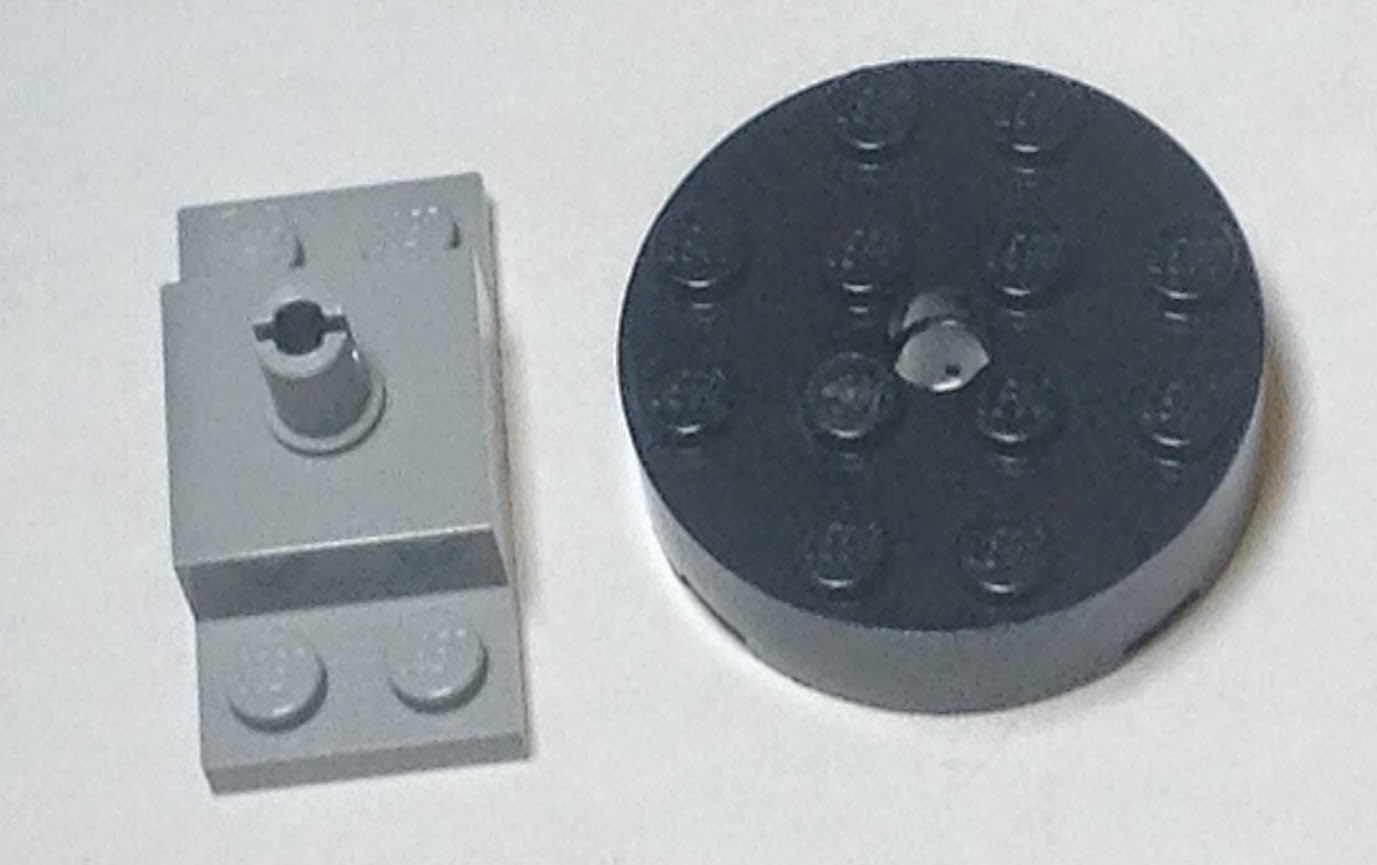 Here is another reason I wanted this set was for these pieces. I want to make a lazy susan or such for the Youtube channel.

A few places, a lot of bricks in colors. Lets make some walls! Some sort hinge bricks too.

One these is in here, usually you only get the separator in Huge sets or one of the Technic ones. Now the builds!

Here is the truck though you are asking why is there Chub there? Well I like the idea of a super large cone or safety sign at a size for a frame...it makes me chuckle.

Well, That wall certainly could be used for cover...

Unless a wrecking ball takes it out! Poor chub!

Posted by Dark Cloud Blogs at 5:41 PM No comments: