Another widely available Creator Set which got me thinking about jets in MF0 or more specifically their size in MF0 sort of standard scale of 7p. So after the review we will explore that subject so don't go away!

I could not get a build but my focus was more on the plane build itself so might have effected me a bit. Maybe get a very abstract art station out of this if you push it. -5 points.

It certainly does have useful parts for a frame or space ship build for +5 points!

Despite having several useful parts but not enough to make a frame and when compared to the rest of the set I think it will equal no for -5 points.

Total: So our jet set is as B- set which isn't TOO bad, specially if you can make use of the not frame/spaceship pieces for some cover? Alright, let's get to part 2! 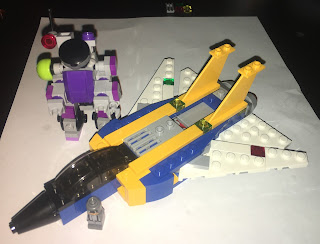 But First how big is a jet in...real life? Well jets or more specific, combat jets come in different sizes so I took five 4th gen fighters (pretty much modern) from five different countries that were the most manufactured in each country to come up with an average so you know what to aim for.

Now we can figure out what that would be in 7p for 30 studs for Length, 19 studs for the Wingspans and 20 plates for Height.

Wow, that is a lot to take it. It is just a bit taller than a Chub and certainly outside of The Box. How does the Super Soarer compare?

I forgot to measure the Height of the Soarer but I think it the least important measure so moving on.

First our Wingspan is a stud longer which is perfectly fine but the length of our plan is 10 studs shorter which is off from our 'average' but actually is still quite in the range you might find a plane, specially if it is a less combat role.

So with that said if you want to use the Super Soarer or at least the instructions and swap out colors I think this could be good if you want to make an airfield inspired table or such.
Posted by Dark Cloud Blogs at 2:14 AM