So another post stepping from the usual fair. I picked this puppy up awhile ago with something specific in mind; playing Mobile Frame Zero: Rapid Attack at a larger scale or minifigure scale. Minifigure scale or 14p originally started off as thought experiment that turned into a challenge between myself and Mantis King as a way to promote the game. We were suppose to face each other at this year's (2016) PAX East but do to mutual agreement we had to cancel and will try again in 2017.

So I didn't try to build anything at regular scale with this set. Given the number of pieces I am sure you could get a 7p or so size frame from it but you wouldn't be checking off the 'more then a handful' box on the usual reviews. So I went straight to building the set.

The complete set gives you the Mantis from the Halo franchise and a docking station for the 'chicken walker' to unload/load its pilot. I figured I could turn the dock into a station with some modification as I need it to fit in a 8x8 square and the default version was too long for that.

So many parts! I mentioned the docking station so let's take a look at that next.

So the Mantis itself is a beautiful model and very much like our Hi-Legs but on a much grander scale.

But she is huge and pushes the edges of what I want to use at Minifigure scale game (14p). 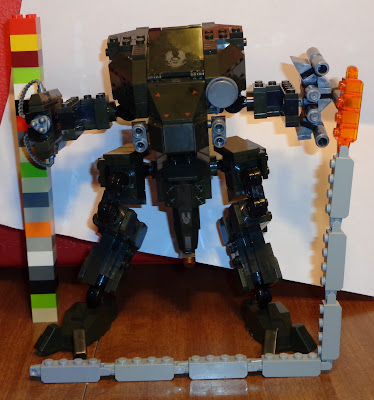 Though it certainly comes with parts ready to be weapons and could easily be modified for custom systems. Let's see how it looks against our usual 7p scale frames.

Of course I also got UNSC Cyclopes for the same reason; let's see how it looks next to that!

Wow, that has some height over the Cyclopes! Oh, look there are also stickers!

So I look forward with playing with the Mantis in a grand scale game of Mobile Frame Zero: Rapid Attack but I think I will only field the one unless I find another at a Magic Price! I shall leave you with a frame card! 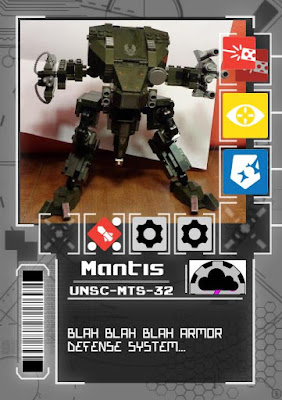