Ever so often I like to doodle and a couple nights ago I drew some frames. Though I wanted to take a different angle; we are always talking/creating combat frames or frames re-purposed for combat but reality is or at least I think it is there are a lot of different frames running around The Solar Calendar so this is what I focus my drawing on.

The Centipede: The Centipede is a single pilot frame that serves the role of public transit in cities or colony collectives. The doors are design to open as two halves, one going up and the other down to act as a ramp. The centipedes small but powerful legs with grabberish feet allow it to operate in diverse environments. Above model is displayed with the expansion half with a bend section allowing to be able to handle addition passengers then the standard Centipede. 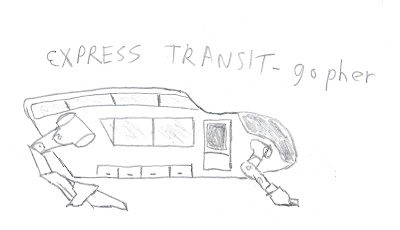 The Gopher: The Gopher is a express transit frame to cover ground between destinations quickly. Despite being a double decker (one model has spartan beds in the top, usually also with solar collectors and rotating on board pilots) the gopher is not a high occupancy frame but design to give passengers a bit more room for comfort. Advance gyro technology help keep passengers and pilot(s) a smooth ride despite the roughest terrain or high speeds. 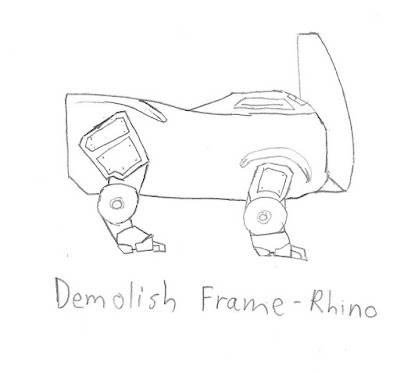 The Rhino: The rhino is literally designed to have a building land on it and still function with little to no harm to the pilot. Due to this frame's unique design (and need of a crazy pilot) few rhino's are in operation in a region but can handle demolition operations, clearing roads and other blunt force operations. The rhino's incredible toughness comes from it's panels being reinforced by responsive muscle cylinders with the most powerful behind the ram or "horn". With the TOMB system ready to keep pilots safe pilots should not fear in case the powerful rhino is buried and cannot escape. The TOMB will keep pilots safe and alive until rescue can reach them.

We have never received a report of a casualty while piloting a rhino. The rhino is a construction class frame and has not been sold to any known military or military like group or have we ever received a confirmed sighting of a rhino in a conflict scenario.

Permission: I look forward to anyone wanting to brick up or draw something much better then my above doodles. Please just let me know and give a source to see it so I can show it up in a follow up post!

I also be glad to answer any questions above these frames above!
Posted by Dark Cloud Blogs at 2:13 AM